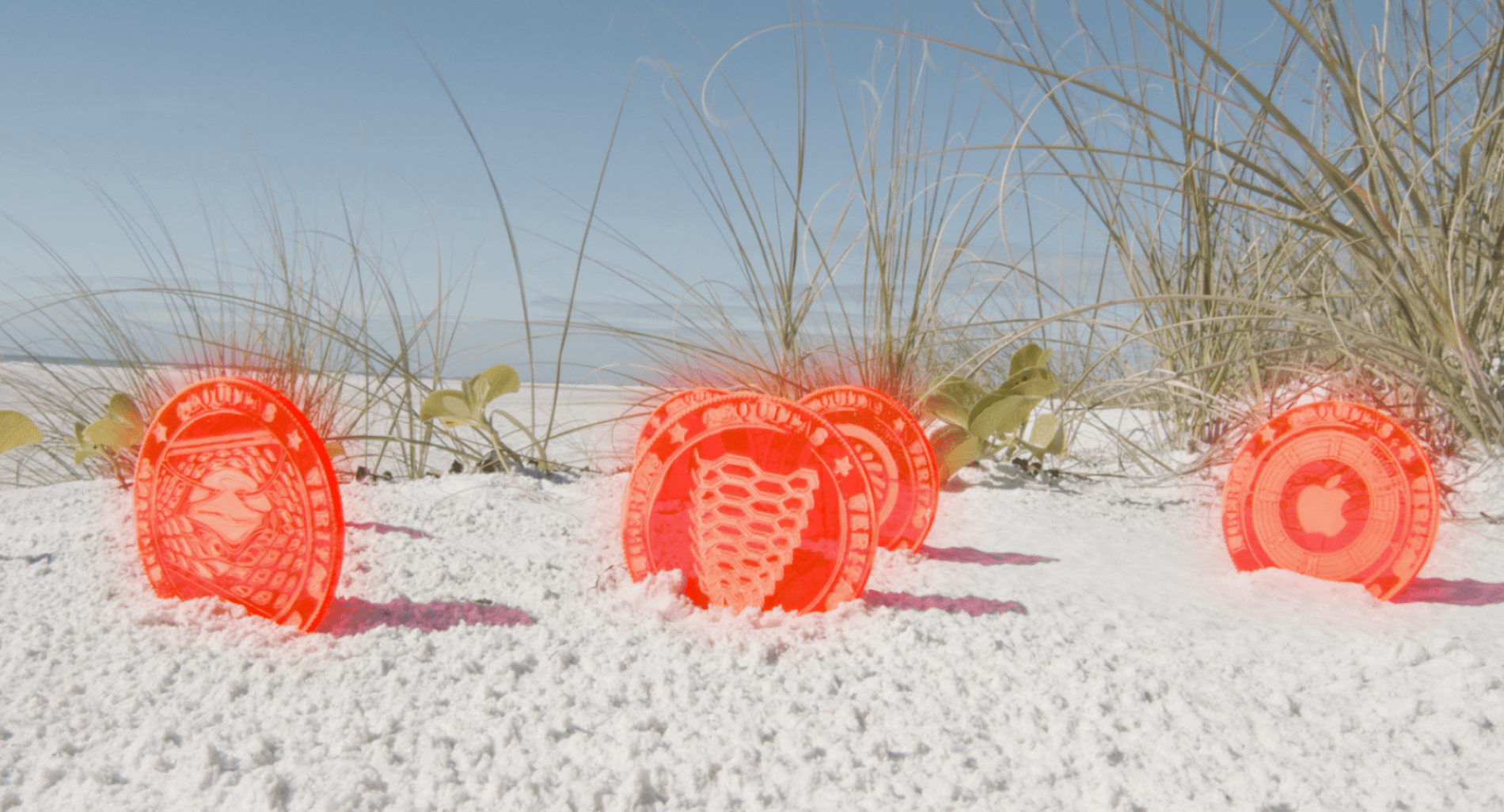 As NFTs and AI become more mainstream, there’s so much noise circulating right now about whether both are good or bad. There is no clear answer because they’re both evolving constantly, but as both start entering different markets it’s important that as designers we start thinking about them critically.

Art and design is no longer just a 2D or 3D tangible experience. An even stranger thought is that design and art is shifting from being human made to being made by machines and artificial intelligence. You’ve probably heard about NFTs, but what exactly is an NFT and is it a good or bad thing for you as a designer to consider. More importantly, how are NFTs reshaping the way we think about art and design?

The acronym NFT stands for a non fungible token; it is a unit of data which can be traded and bought on a blockchain and is completely unique and one of a kind. The blockchain is a distributed and immutable ledger that allows us to track and distribute transactions. In simple terms a blockchain acts as a record which keeps track of all of the transactions and investments made starting with the original owner. Normally NFTs are bought and sold with a form of cryptocurrency.  NFTs can take any form of digital art; some examples include: GIFs, music, video, animations, and graphics.

As the art and design-world becomes more digitized it is opening up new conversations about the value of art that is intangible. The new found infatuation of cryptoart is so popular because it creates a somewhat level platform for undiscovered and emerging artists and digital designers to sell their works and bypass gatekeepers. It’s no secret that for centuries the people who profit and benefit from the artworld have primarily been dominated by white men and the bourgeois. Even though apps like Instagram have made it more accessible for people to share their work, it’s still common that very few actually get discovered and are shown in major art institutions, museums, or magazines. So you can definitely see the appeal of NFTs, which allow anyone to create a token and sell their cryptoart, which in turn would provide them an alternative way to receive more recognition or compensation than in the real world.

The dark side of Cryptocurrency and Cryptoart

Lately, cryptocurrency and NFTs have received a lot of attention – both positive and negative. One of the main arguments made is that both are extremely harmful for the environment. As of now Ethereum is one of the most well known cryptocurrencies and is the most used CryptoArt platform. When someone buys, creates or sells an NFT using Ethereum they’re responsible for a percentage of the emissions generated by miners for clarity, mining is a process of adding transactions to a public ledger also known as the blockchain, it is not to be confused with minting which is involves creating an NFT. Every time you use Ethereum, a gas fee is paid, normally by the artist to publish or mint on Ethereum. The fee goes towards Ethereum to pay back the computing energy required to process and validate the transaction. Ethereum uses something called proof of work which is extremely energy hungry. The fee associated with making a transaction on Ethereum is ironically called gas.

“Ethereum alone is responsible for 96,200,000 tons of CO2 since its inception; this is equivalent to the combined annual carbon emissions of the 84 least carbon intensive countries around the globe.”(Art News)

A light look into AI and NFTs

Artificial intelligence is stepping in and creating NFTs, still how we differentiate between how much energy is being used by a human versus a machine is unclear. Machine learning or Artificial Intelligence has been adopted by a lot of digital designers, yet it’s still very new that ML and AI are entering the NFT universe. Pictured above and below are two NFTs made by AI, the one below titled Unevolved Celebrities which is part of the project MicExp-AI x NFT. The project focuses on human faces, body language, micro expressions, and abstractions, and uses classical AI algorithms and public human face datasets.

One could argue that using more computer energy to generate a digital design is even worse than a human creating it. There are many possibilities with AI and NFTs two possibilities that have caught my attention are AI generated NFTs, and NFTs embedded by AI. To put AI generated NFTs into perspective, What if we could give a machine the proper tools to create an algorithm that could then create one of a kind NFTs of our digital designs. An even crazier thought would be if we could make the AI even more intelligent so that it could demonstrate language and speech capabilities and converse with users, answer questions, or interact with a specific unique environment which is a potential outcome of NFTs embedded by AI.

An artist that is already on their way to executing this is Refik Anadol, his product melting memories pictured below focuses on the materiality of remembering, and showcases the elusive process of memory by taking data from neural mechanisms of cognitive control from an EEG (electroencephalogram) which measures changes from brain wave activity, the data sets act as the building blocks for the algorithms that the artist needs for the visuals on display. Lastly there are some platforms like Fetch.ai which is an artificial intelligent blockchain and Alethea AI is an intelligent metaverse.

The AI ideation card deck made by Nadia Piet was created to help designers, managers, and innovators grasp AI capabilities in regards to social, user and business value. This card deck could potentially be used to spark ideas about how to incorporate AI into future projects. With all of this talk about NFTs and AI it’s left up to your own moral compass and research to decide if you want to dip your toes in the water.

Well now that we have analyzed a lot of the negative sides of NFTs, let’s dig into some of the positive sides, and let’s get back to this question again of why you as a designer should even care about this. Digital design and technology go hand in hand — without technology we wouldn’t be able to showcase designs and artworks that are digital. Let’s put the transformation of design and art into perspective. Artists were once only considered painters, illustrators, photographers just to name a few, but once the 20th century jumpstarted, the description of an artist changed from tangible to intangible. With all of this intangible art, how do we define its worth, and how can we adapt to the marketplace as designers?

The idea of determining the value of someone else’s work is completely subjective. Today you can buy an original piece of Jean-Michel Basquait’s work anywhere from 10–100 million US dollars. At the beginning of his career this was a different story. The same goes for digital art, it all depends on the spirit of the times. Cryptoart has its own digital signature, there’s only one that exists and it can’t be traded for something similar creating a scarcity in the market which then increases the price. You can even make it so that the original creator of the NFT will get an amount of the proceeds made every time someone sells or trades, kind of like music royalties in a way. The surface has only been scratched with the potential that NFTs create for everyone involved.

A lot of people are working towards producing new possibilities to buy and sell NFTs in a more energy efficient way.Two new initiatives are proof of stake trading and clean energy, but it is still quite foggy of whether or not this actually works and if it’s not just a fantasy. POS trading systems don’t incentivize extreme amounts of energy consumption in turn producing clean energy. New websites keep developing that track how much carbon offset you are producing, Offsetra which connects businesses to how much carbon they’re producing and carbon.fyi a more user friendly option that allows you to track carbon for all Ethereum addresses are the most popular at the moment. Earlier this year in February, Artist Grimes released some NFTs, which resulted in 122 tons of carbon, and her open NFT “The Bitcoin Angel” created 468 tons. If you wish to learn more about the new initiatives to make more energy efficient Cryptoart and currencies, you can visit the resources below:

In this article we have only touched on how digital art is changing and how we can think critically about it. I, just like many of you, have become extremely interested in NFTs. I’m still deciding for myself if it’s a platform I would like to sell my own art on. I think what intrigues most people at first glance is that this provides a new way to gain recognition and maybe at the core to gain monetary funds to either support your art or to get rich quickly. Although a lot of established artists are jumping on the bandwagon, it looks as though there is still a place for the underdog to benefit from this gold rush opportunity.