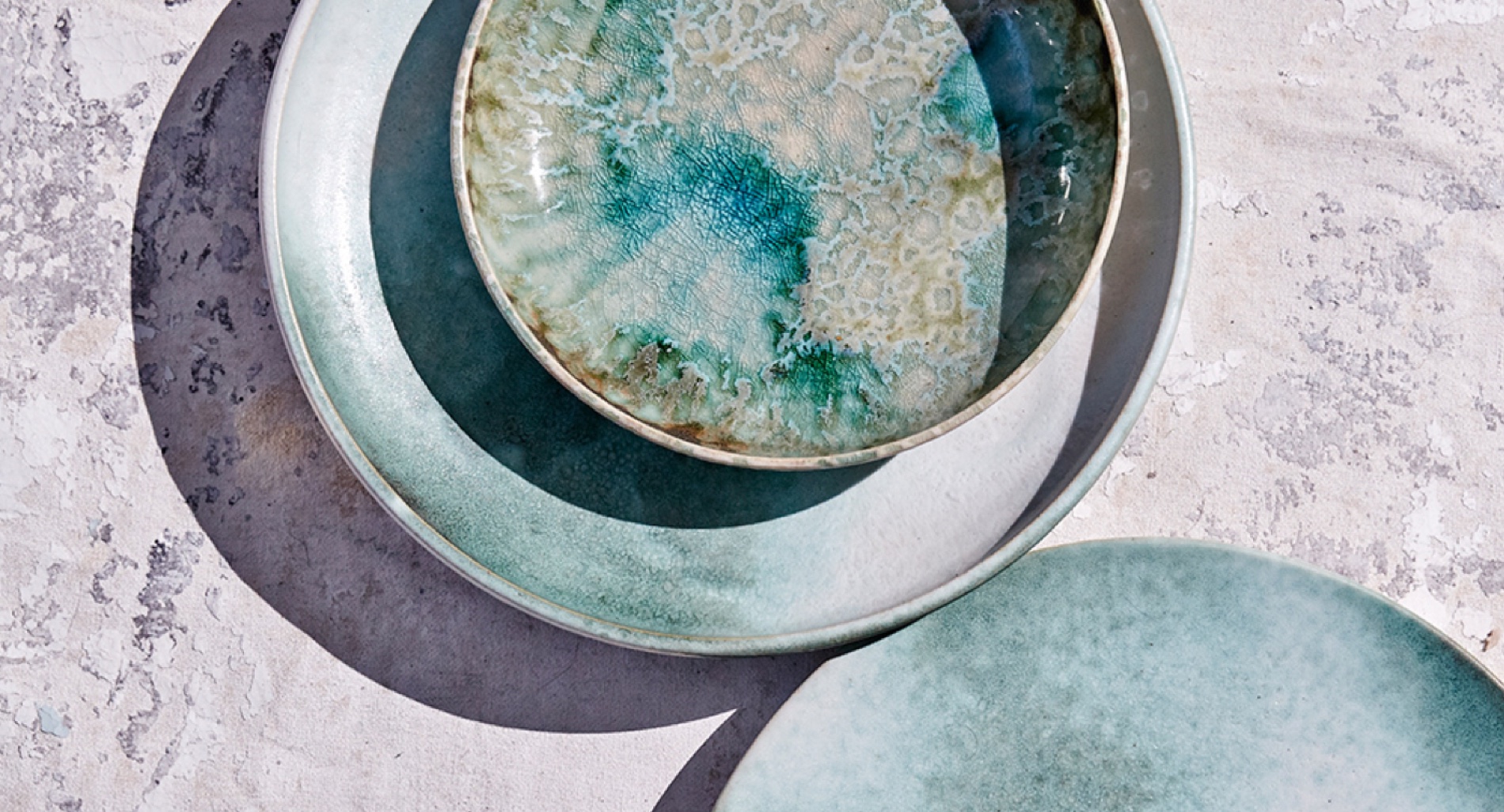 What Can Digital Designers Learn from Ceramicists? Denmark Meets Japan.

Following our conference in Tokyo, an interest has been sparked in telling stories that highlight where creative designers from Denmark and Japan meet. Aage Würtz, a famous potter based in Horsens, Jutland, and Etsuji Noguchi, born in Saitama, Japan, symbolise their two countries.

Aage Würtz and Etsuji Noguchi engaged in conversation with Design Matters about their lives which they have dedicated to ceramics. Having them side by side embodies the cultural differences between Danish and Japanese art and emphasises how the two countries connect and differ and the ways in which the artists can learn from one another.

Würtz lives and breathes this world, and looks to unexpected forms of creative expression for inspiration. Noguchi also loves what he does but his focus is on using his work skills that he has transferred from an entirely different field. Würtz brings to his work a traditional background of learning the skills of craftsmanship in institutions; whereas, Noguchi took his lead from one inspirational master whom he deeply respects.

Where do you get your inspiration from?

Aage Würtz: Jimmy Hendrix! I get inspiration from feeling — feeling the clay. Unlike some artists, I do not look at the sky for inspiration. I am also inspired by traditional Japanese ceramics, and many can be found in Denmark.

I produced ceramics for Michelin restaurants, like Noma, and came across professional chefs; I am very influenced by them. I have found the same passion in them as I see in myself. Even the way they learn to chop carrots is full of passion. I’m an old man, but in 2005 when I met the people in Noma, it was so inspiring for me because they think the same way as I do. They also treat me as the master of my line of work; and I could see the gusto and beauty in theirs. It is not the process of how they work that interests me, but the energy. Craftsmanship is central for chefs. They would die for making food. We artists live on the edge, it’s a terrible way of life. If something goes wrong, it is a catastrophe. We cry a lot.

The thing I love most about these chefs is that they are always working together. They have fantastic discipline. What I really admire in their business is the fact that they bring a lot of people together. There is wisdom in their collaboration, compared to a potter working over there for two hours a day, and another over there who does not do anything else and has little energy for their work.

Würtz’s attitude could influence Digital designers to look outside the obvious realms of inspiration, leading to new discoveries in hidden places. Old ceramicists are symbolic of artists who use a traditional way of seeing projects through from the beginning of the design, to the end of the production process. This may seem alien to digital designers who can constantly edit and rework art, without wasting any material. The ceramicist cannot afford mistakes — their products are impacted when something goes wrong. The potential for imperfection in these products is arguably what makes them unique and aesthetically-pleasing. Could this unpredictability in production be transferred to enhance processes in the Design world?

Etsuji Noguchi: My inspiration comes from my master, Takashi Nakazato. He was my first and most important source of inspiration; he has made the biggest impact on me. At eighty three years-old, he is still working. He likes travelling, working, and eating. He is still energetic and makes ceramics for Japanese cuisine, including sushi and soba restaurants. He travels and works in places like the United States. He has also been to Guldagergaard, a highly-regarded workspace for artists. I think he gets new ideas from the things he experiences. The way he makes things is changing. His taste has changed, and he is focusing more at the moment on producing for everyone, looking outside Japan, so the things he makes now are not just for sushi or soba.

Can you point at specific similarities or things where you feel Japan and Denmark are connected?

Etsuji Noguchi: There always has to be a relatively simple form. Denmark produces plates which make the food look much nicer, and they have a fascinating texture, it makes the food ‘pop’.

How do you define a product that is bad or has gone wrong?

Aage Würtz: The form. What’s a good product? It has to be silent in a way, it has to have its own life. Ending up with a bad product ‘ruins’ my heart. I have not made one pot with which I am completely satisfied — I am still seeking it. I know what I want, I look at the elements, and I see the possibilities. It is not the shape or the glaze nor the size. But you can grow very fond of a little piece.

Is it the same with you, that you are never 100% satisfied?

How do you pass down your craftsmanship? Würtz, did your son, Kasper, become passionate about ceramics because he saw you?

Aage Würtz: No, no, I warned him! He started relatively early; he had been studying literature and came to a point where he did not know what to do with his technical studies, other than teaching. He always showed an interest in working with me, and it was very lucky for me because years later, when I was ill, we switched roles.

And Noguchi, are you passing on your expertise to anyone?

Etsuji Noguchi: Not directly, but my master, Takashi Nakazato, is the fourteenth generation and there are two younger generations after him. Both his son and his grandson work in the studio now. I have my own smaller-scale studio in Japan where I work alone.

Some more about the artists…

Can you tell us about your background? Where were you educated?

Aage Würtz: I was first educated in craftsmanship at the Kunstakademiet, an art academy in Arhus, and then by my sister, Marie Würtz as my master. During this time, I visited the Design Museum, where I was exposed to lots of Japanese and Chinese ceramics and a few pots from the Far East. Their products were different, and I tried to work out how and why, but I could not. They had something about them which I could not replicate. Today, I know how they are made, and my ceramics are not based on any of the products from these places, but on a feeling.

Etsuji Noguchi: Before I worked with ceramics, I was really into surfing. I loved the sport and simultaneously I was fascinated by how boards were made. Fortunately, I found a job in a surfboard factory near Tokyo. Making surfboards requires so much craftsmanship because they are made by hand. After three years, I was led to exploring crafts made from more natural elements because of the toxicity and chemical processes involved in making surfboards. That’s when I realised the potential to work with ceramics. So I looked for places that allowed me to learn about ceramics and still be able to surf. I used to live in Kanagawa. There is an island called Tanegashima in the south part which is very famous for good waves. I found a ceramics studio there, and asked for a job as an apprentice. I moved there in 1999. I never went to a school.

Can you tell us more about your ceramics?

Aage Würtz: If you have read any Kierkegaard, there is a sense of repetition — gentagelsen — you cannot experience the same moment twice, but you have to seek the connection in his writing.In my ceramics, there are a lot of coincidences that I cannot control. As humans, we want to control everything, but we cannot. There are some stable elements in my ceramics, and I can disturb them, but there are external factors that cannot be controlled. There are so many layers — there are five different layers of glaze. I would not call my ceramics Japanese, but Japanese ceramics have changed my world — especially the Japanese way of decorating.

How did you two meet?

Etsuji Noguchi: It was me who found Würtz. His ceramics were so influential in Japan, I knew his work before I came to Denmark — that was one of the reasons I wanted to visit. I was also interested in furniture and anything involving Danish design. I simply visited Denmark as, well, a fan!

Aage Würtz: I have never been to Japan! Noguchi comes to me. I just remain in my little circle. But I can see their way of ceramics, and I respect their skills. One day, Noguchi and I will hopefully do a project together.

How do you work together in the same studio?

Aage Würtz: Clay design has gone out of fashion. You won’t find very many people who can survive by producing ceramics. I also think the craftsmanship in Denmark has disappeared and most things are mass produced, whereas in Japan, apprentices have to work and show their dedication in order just to be afforded the opportunity to be with a master to whom they show respect. Although, sadly, Japanese education is starting to look a little like ours in the West. Design and production have been separated. So there are fewer artists following a product from creation to completion, and being with a master is becoming a thing of the past. Just like the new generation of ceramicists, designers today can focus on one aspect of a process.

Etsuji Noguchi: In Japan, ceramics is very traditional: it is one of the oldest traditions in the world, and derives from the Jomon Jidai (Japanese hunter gatherer prehistory c 14,000–300 BCE .) But unfortunately the system of apprenticeship is changing — it is collapsing. People no longer want to serve. So we are losing that tradition. Making ceramics traditionally is arduous: it requires clay, a kiln, facilities, manpower; but now, instead, it’s like a production line: we can easily buy clay from supply companies and purchase an electric kiln and make commercial ceramics with ease. I think this is why people no longer spend a lot of time learning how to make clay into ceramic pieces.

Fortunately, these two men stay loyal to their traditional processes, keeping ceramics alive by creating artisan pieces as they have for decades.

Protected: Insights for the Future – Interview with Futurist Nicklas Larsen

There is no excerpt because this is a protected post.