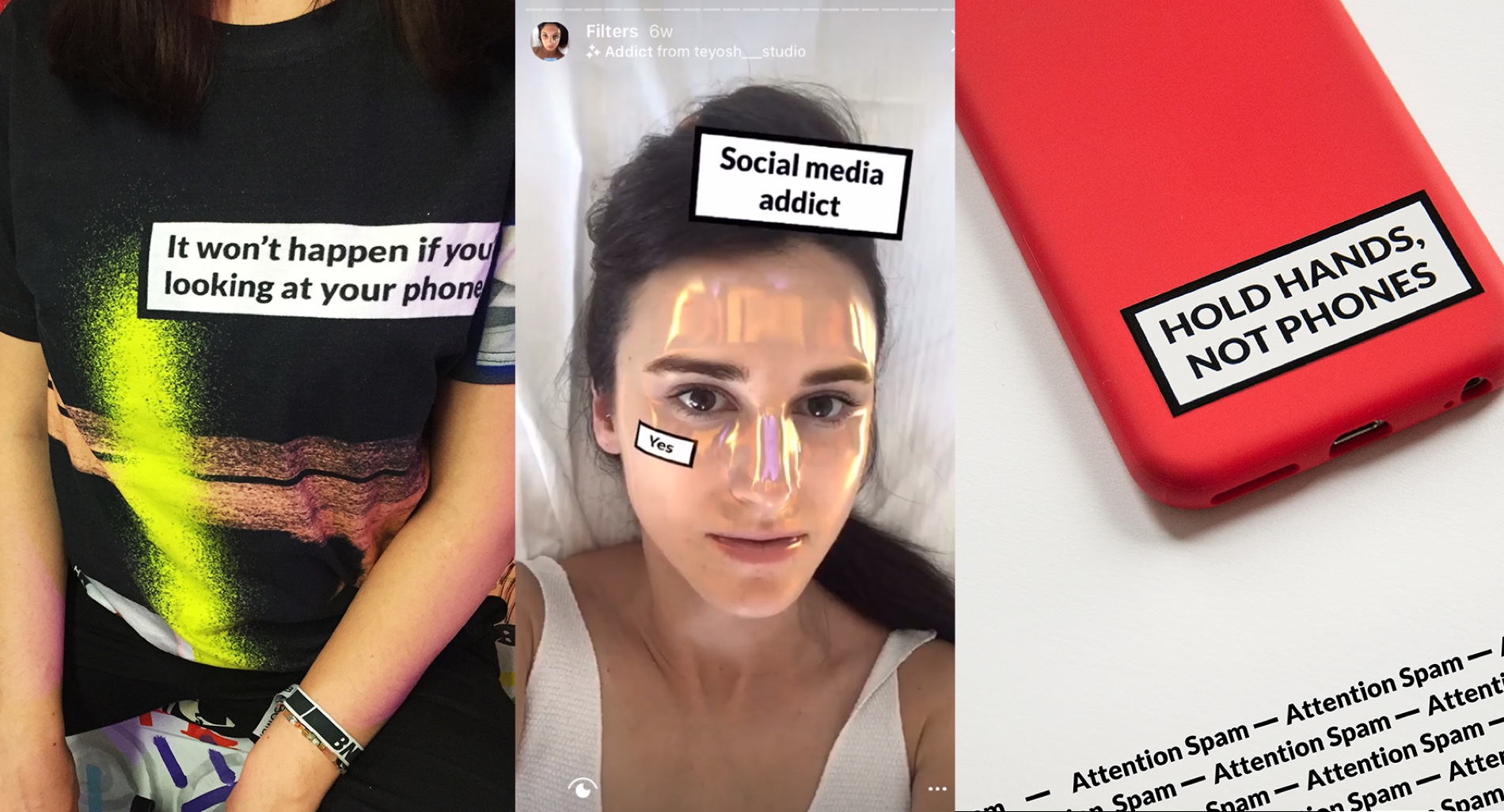 Social Media and digital technologies influence our habits, thoughts, and perception of the world. Art director duo TeYosh offers their point of view on this modern social phenomenon.

TeYosh is a multidisciplinary art director duo that stands out for their cutting edge contemporary digital art. They work to explore the relationship between humans and digital technology, offering an alternative point of view on modern society. Originally from Serbia, Sofija Stanković and Teodora Stojković are based in Amsterdam working for renowned clients that include MTV, Burberry, Nike, and Huawei.

Our everyday use of digital technology has caused a rewiring of our brains, that has made our problem-solving mechanisms rely heavily on technology and has remodeled the way we behave and socialize with other people.

To dig deeper into this matter, we met with Sofija and Teodora to reflect on how we behave online, and what trends are developing since they spoke at Design Matters 18.

So, what have you been working on lately?

We always look at how technology is influencing people and human habits, but in our latest project we’ve focused on how much time people spend using technology. The project is called Attention Spam and we say it is a “fashion collection for our ourselves and our gadgets”. We made a series of statements to place on phones, like cigarette labels, to remind ourselves to use technology more mindfully.

It started out with some research, where we developed a series of questionnaires for our Social Media channels — e.g. Instagram polls — to help us set a direction to our research. We put statements such as “I often take out my phone as an impulse” or “The last thing I see before sleeping is my phone”. Sometimes the answers had a 50:50 ratio, but most of the times the hypothesis tested positive.

We always look at how technology is influencing people and human habits, but in our latest project we’ve focused on how much time people spend using technology. The project is called Attention Spam and we say it is a “fashion collection for our ourselves and our gadgets”. We made a series of statements to place on phones, like cigarette labels, to remind ourselves to use technology more mindfully.

It started out with some research, where we developed a series of questionnaires for our Social Media channels — e.g. Instagram polls — to help us set a direction to our research. We put statements such as “I often take out my phone as an impulse” or “The last thing I see before sleeping is my phone”. Sometimes the answers had a 50:50 ratio, but most of the times the hypothesis tested positive.

How do you come up with the idea for a project when it’s not commissioned by someone?

We are very analytical. When we notice a problem or a habit that attracts our attention and seems worth paying attention to, we ask ourselves what we could do to solve that problem or change that specific habit or situation.

The latest trends and new technological developments are often an inspiration to us. Inspiration can also come from books that might not even be related to design. When you read, you invest a bit more of yourself and your time, allowing ideas to pop up in your mind. But in regards to the visuals, anything can inspire us. From traveling and experiencing different cultures to films or clothing.

However, most of the times, it’s what we can’t fully grasp that pushes us to dig deeper.

Can you provide any example of a trend you explored and that you couldn’t fully grasp at first?

We’ve been fascinated by face filters lately. Why have they become so popular? Some may say that we are all narcissists. But there’s probably something more to that, as using face filters means applying a digital layer onto ourselves. Some people are fascinated by this, because they want to become a blend of a physical and a digital being. The is plenty of beautifying filters out there for sure, but there are filters that transform you and create digital environments around you, fascinating non-designers too.

Social media allows us to “build” our own picture of ourselves, which doesn’t always necessarily mirror reality. What are your thoughts on this?

We were discussing this recently. It’s indeed very confusing. Your online self can look quite different to your offline self. And when you are so focused on your online self, you might fall into a fear of missing out in real life, as you might come to realize that your offline life isn’t that exciting in reality. You can project a different image of yourself online, and by creating a persona you may feel like you have control, but that persona doesn’t exist in real life. It’s almost like you try to keep up with the ‘yourself’ you created, in a way. And that’s quite interesting to us.

Many look for validation in number of likes, followers, etc., which can affect their self esteem. Do you think designers creating digital products are concerned enough about this?

Over the course of 2019 Social Media and mental health have become a more relevant topic of discussion. People are starting to take this into account more. I wouldn’t say this has become mainstream, but there is more of a tendency to bring this topic up. For instance, Instagram is testing hidden likes and followers. Which again has its economical reasons. It’s not purely for mental health, but at the same time, it’s at least wrapped in the same package. Another example is the iPhone setting called Screen Time that allows you to track how much time you spend on your phone, on each app. You can also set time limits on some apps like Instagram. This proves that there has been a discussion about how technology is influencing mental health.

Siempo and a couple of other smaller companies are developing phones that don’t have all the social media apps, but only have the basic features a phone would need. It’s a new generation phone, it’s simply a healthier version of phone without apping.

What do you think is the designers’ role in giving a critical voice to society?

I think creatives are in essence visionaries who are able to perceive a problem in a creative way and connect things differently than somebody who is educated in a more traditional field. It’s fundamental that creatives try to show things from new perspectives.

Designers in particular have the ability to turn some dull and uninteresting topics into something fun, appealing, and mainstream. That’s why I think it’s important that designers use their tools to create awareness on different social topics.

Sustainability, for example, has recently become a relevant social topic. Many designers are now working with it, and so are we in our latest works. Only in the beginning of 2019 sustainability became a phenomenon. Almost nobody was talking about it before. Social Media played a huge role in spreading the word and popularizing it. Since sustainability is such an important topic for Gen Z — the generation born between 1996–2015 — , big companies are urged to become more sustainable in order to stay relevant and sell their products. Raising awareness on Social Media has become such a powerful tool that it can actually change mass production and supply chains. How cool is that?

In your talk at Design Matters 18 you say that digital technologies change the way we communicate, and that societal changes are hard to spot as they happen slowly. What changes are we seeing now?

In spite of things like face filters, people are now more prone to expressing their true selves rather than a polished version of themselves. I feel that there is more demand for people to show who they really are. People are showing their unpolished lives and faces, which I think is great.

This indeed shows why companies are reaching out to micro influencers rather than macro influencers. Brands are often paying influencers to advertise their products or their services. But these companies noticed that the gap between real influencers — e.g. people who have more than 100K followers — and regular people is huge. People are less inclined to believe in macro influencers, and they would rather believe in influencers who have, for example, 3K or 4K followers. Micro influencers appear much more authentic and grounded. If they advertise a product, people trust them more. Even though we are talking about advertising, this shows how people are now searching for more real content, authenticity, and someone they can relate to.

The Oxford Dictionary chose selfie as word of the year for 2013. This word has become part of our daily vocabulary so much that, in 2018, you came up with the word forcie in your Dictionary Of Online Behavior. What word would you choose for 2019?

From our Dictionary, the word of the year for 2019 is Clickvalue. It is a subjective value of someone’s like, retweet or share. Unlike the currency of offline life, where every dollar is the same, no matter who it is coming from, the currency of online life consists of clicking like, retweet and share where not every click has the same value. In the past year, we’ve seen the influencer economy gaining more significance than ever.

Out of all the media spaces, most of the sales that have been made last year were through IG stories. On a platform that has such a power, for an influencer every like or follow is vouching for someone’s quality. A like, follow, or share from an important person might mean a change in career. In private life clickvalue is dependant on inter-personal relationships. A like from a crush is more valuable than from mom.

What will influence the year to come in your opinion?

Communication is becoming faster and faster, and the platforms we use facilitate us in doing so. For example, you can reply to Instagram stories only by using an emoji reaction. This enables us to respond so fast. But what is funny is that you can even like someone’s reaction to a story. It’s the ultimate least effort you can put into the interaction. Also, if you don’t know how to reply to a message, you can simply like it. So you are engaged, but it’s a fraction-of-a-second effort.