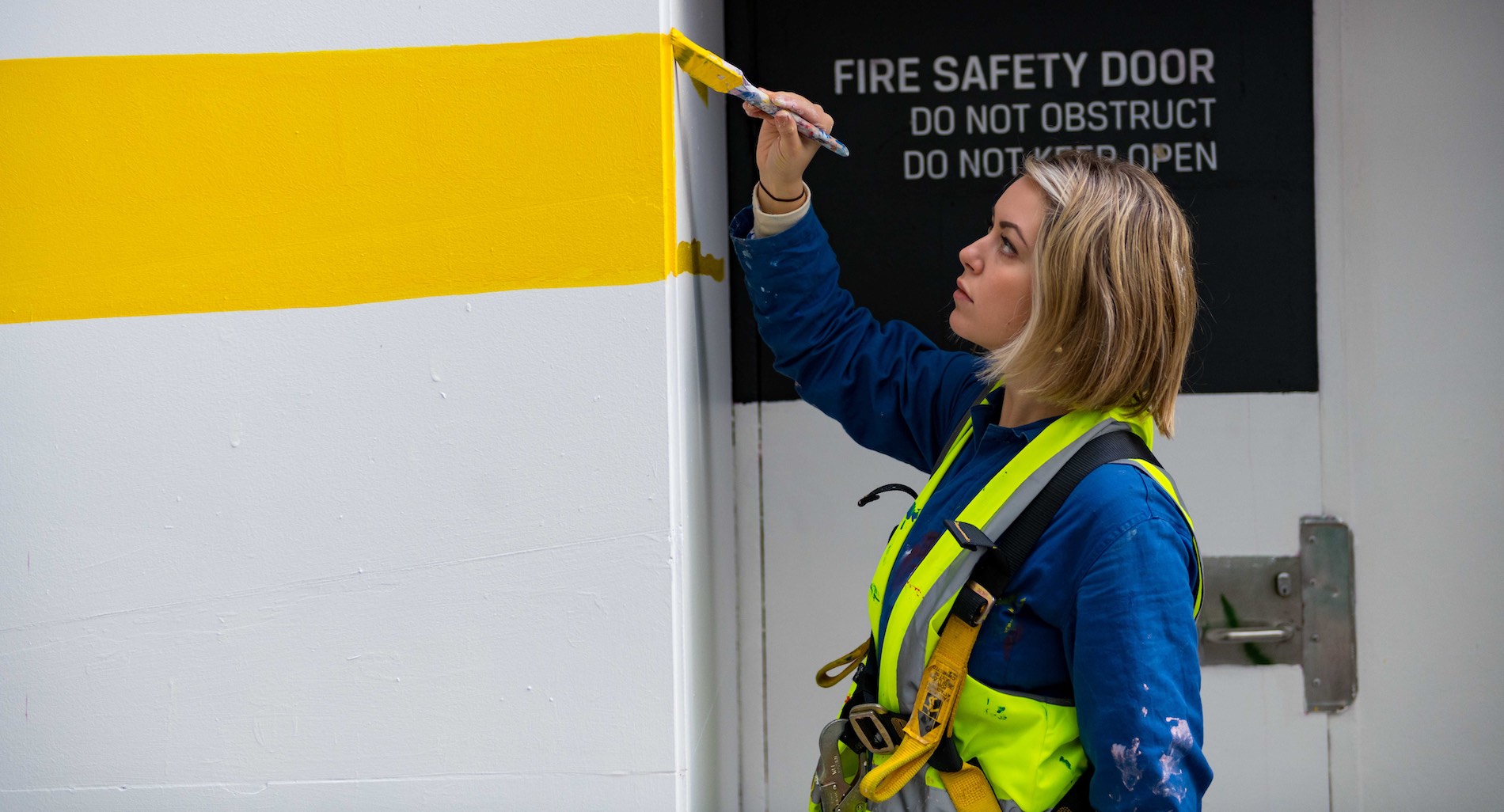 The Art of Self-Deprecation, or How to Dismantle Society’s Stupidity with Humor. A Chat with Celeste Mountjoy

Why do you think people find self-deprecation -or should we say vulnerability- funny?

It’s something that I’ve always wondered about, because when I started making the type of art that I do, I didn’t necessarily go into it thinking “I’m going to make art that is relatable”, or “I’m going to purposefully make art that is vulnerable”. I think I was just making art about my errors or my fuck-ups. And people seemed to be finding that funny. Looking back, I guess that’s because there’s a sense of relief that comes with relatability, where identifying yourself with someone else’s struggles gives you a moment to feel that you’re normal. And it feels so good, that we want to laugh, but also keep talking about it. For me, that’s kind of nice, it’s something that connects us.

Your work keeps you constantly connected to the internet, doesn’t it? However, the online experience can also be where people compare themselves to others, and many end up feeling poorly, sometimes to the extent of developing mental illness.  How do you protect your mental health?

This is an interesting question for me because it connects to something that I think about often: is Social Media predominantly toxic? Is it ruining us in a way?

I believe that humans are going to compare themselves to other people, no matter what. It’s in our nature, it has been happening since before social media and it’ll continue to happen until the end of time. It’s how we like to value ourselves. We measure our success by looking at other people and making sure that we’re on track to being average. Social Media makes that tricky because there, we often only show the parts of ourselves that we want other people to see, so the bar for what normal is, becomes altered and skewed. Then we end up with a strange perception of how the rest of people live happy “normal” lives, but obviously, they’re not posting about their struggles.

I was chronically online from a young age, and this got very toxic for me. I grew up in a time when the internet was so present and new, so we dove into the deep end of it in a lot of ways. Even as a teenager I never really put an untrue version of myself out there, but I did allow the perceptions of strangers on the internet to shape who I was. That was damaging in some ways.

The only real solution that I found is to spend less time on Social Media. Go outside and touch some grass or hug a tree (laughs).

Let’s talk about fame, though that’s a tricky word. We could also call it “recognition, or “influence”. Having many eyes on you can be complex to handle, it’s a big responsibility, right? How do you take care of yourself around that?

This is relevant to how I’m feeling at the moment, but also relevant to what I’ll talk about during the Design Matters conference. It is, at the same time, something that I’m still trying to figure out. Because I started doing what I do so young, it can feel like I hopped on a train, and there were no stops. There was not a time to get off and breathe or see what’s around you, to check on yourself, see how you’re going. My take now, is that being online that much as a teenager and being exposed to so many people, can mess with you. I went from being a confident adolescent who wanted to do all kinds of things and wanted to share every part of herself, to finding out now that I’m growing into quite a self-conscious adult. The exposure wore me down and got me scared in a way, so I started wanting to preserve myself more. A lot of it comes from being someone with depression who struggles with self-loathing.

I’m still trying to find the balance between over-exposing myself, and feeling like I have a few layers of protection. 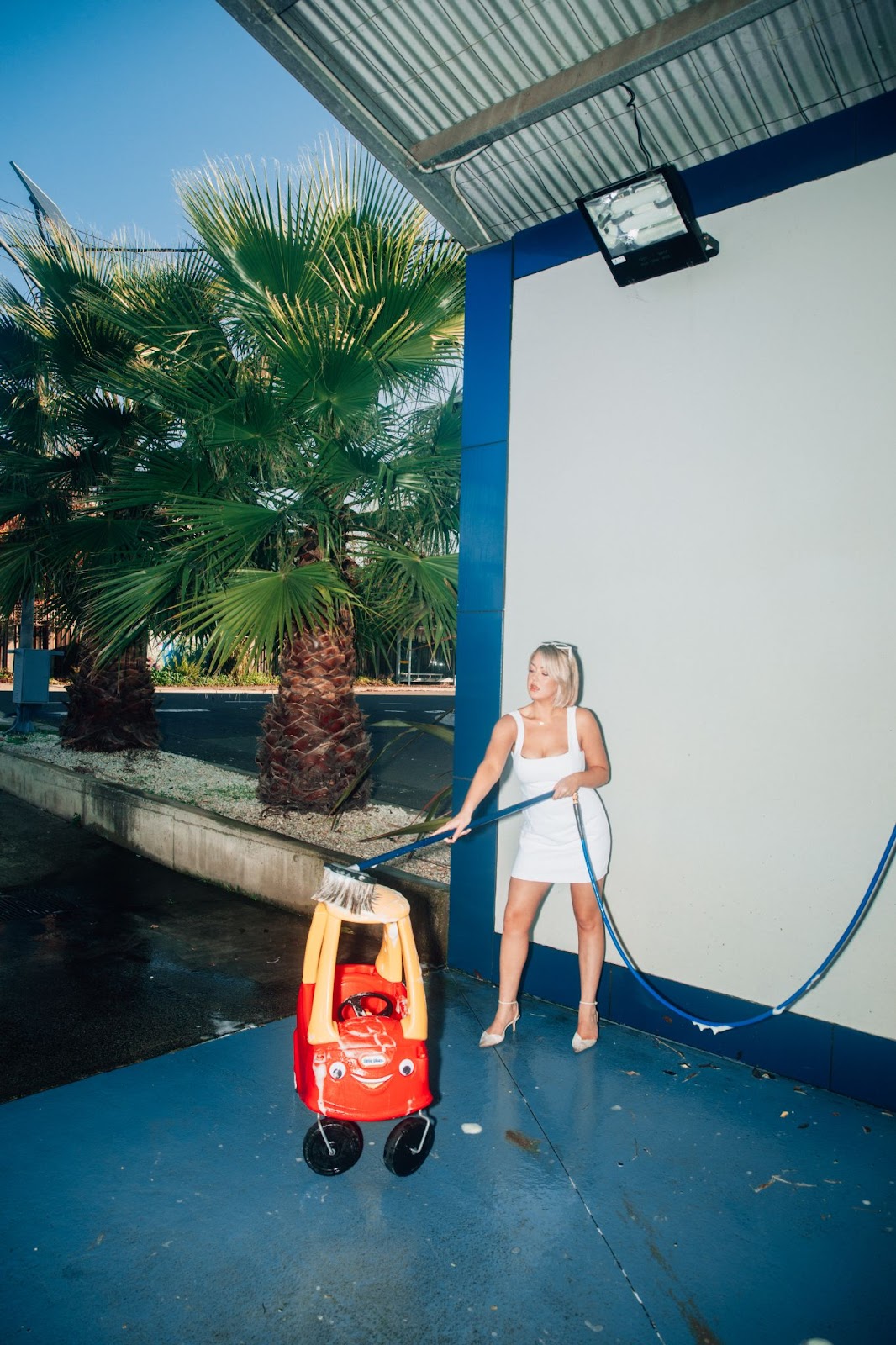 Let’s bring the conversation around self-worth and identity. I’ve always thought that humans form their identities a little too much around their profession. Do you think that’s the case? Does it have to do with the capitalist order? It almost seems like it predicates that people’s worth comes from how much money they produce or accumulate, and that gets complicated and ugly… But in recent years, generations like yours are helping us on a path to form strong and proud identities in other ways, like around our beliefs, genders, neuro-diversities, or ethnicities… What’s your take on building an identity as a young woman?

I love this question because I think about this a lot. I think that we put so much emphasis on our careers because we’re so desperate for a sense of identity, that it’s okay for us to just put ourselves in a box. “I’m an artist, therefore I need to be artsy, smoke cigarettes, drink black coffee”, and suddenly you become a stereotype of yourself. That’s what happened to me when I was growing up and becoming an “artist”. My youth was deeply fetishized on the internet. The fact that I was a 16-year-old girl who was edgy, with controversial commentary, built up an online persona that wasn’t me. I remember being 16 and reading articles about myself. There, I was being fully described, way before I even had the chance to explore how I might describe myself, or my art. And that was insane because I let those words dictate who I was going to be. It’s so hard figuring out who you are as a teenager… I’m not a teenager anymore, and I still don’t really know who I am (laughs).

“I think that we put so much emphasis on our careers because we’re so desperate for a sense of identity, that it’s okay for us to just put ourselves in a box.

This ties into pretty much everything else that we’ve gone over during our talk: It’s really important to not let other people’s perceptions of you dictate who you’re going to be. As a young adult now, it feels as if I put myself through a harder path, like I’m waking up from a dream and starting to wonder about the basics. What were my hobbies? What did I like besides drinking in a bar? Now I’m all about standing back and figuring out things about myself without those extra pressures being involved. I think this is important. That’s the advice that I’d give a younger me anyway: “take a little bit of time away from the phone and the computer. Talk to people who aren’t on your screen, make some friends, and try some hobbies”.

Once you discover what you love, you know who you are a little better, right?

I completely agree. But at the same time, this is something that I’ve also found hard, because drawing has always been what I loved doing, and since my drawing is so tied to my image on social media and is my job and what I live from, I find that there’s extra pressure on it. Sometimes it can become unenjoyable due to all these factors coming in, making me over-aware about how my audience is going to perceive what I’ve made… It would be so nice and freeing to make a drawing without considering what people are going to think. Unfortunately, this feels like it’s tuned into me now. It’s how I create art. I’m normally thinking, “is this relatable?”, “Am I making something that no one is going to understand?”, “Will everyone hate it?”. I guess I have to find enjoyable things outside of this, so I can form an identity that isn’t just the “tortured artist” (laughs).

We think your work is genius and are looking forward to your talk at Design Matters 22 so much! Tell us a bit about how your best ideas have come to life. Do you find inspiration in everyday moments? Stories from friends? Memes? Who is the funniest person you’ve ever met (or wish you met)? Why? Can you share with us something that makes you laugh out loud?

I’m an overthinker. I obsess over embarrassing things I’ve done, parts of myself that I hate, or just funny things that have happened to me. I am constantly processing different experiences and mulling over them again and again until something comes out. People are always doing funny and embarrassing stuff, and I think it’s funny to talk about all that.

At Design Matters 22, I’ll tap into how we should be more open to talking about those subjects, because it ultimately makes us feel a lot better than when we’re trying to play cool, walking around as untarnished sparkling robots. As for the funniest person that I’ve met, I don’t want to give too much away now, because I will also be talking about that at the conference.

Before we are done, please tell us about your book. How long did you work on it? How is it different from your daily publications on Social Media?

My book has been a journey in regard to how I feel about it. It’s one of the biggest milestones I ever achieved and one of the biggest projects I ever worked on. On one side, I’m pinching myself and can’t believe it actually happened, or that I was given such an opportunity. But there’s another part of me where my insecurities flare up, and my awareness of the book is tangible.

In the book, I decided to cohesively write down the last 10 years of my life. Some of it is embarrassing, shameful, or upsetting. I guess I have a lot of mixed feelings about it, but at the same time, I’ve spoken to people that read it, and told me that my book resonates with them, and that makes it worth it. Especially other young people, or women who can read it and feel less alone. That is the job I wanted to do, and that makes me happy.

Celeste Mountjoy is the person behind @filthyratbag. She will give a talk at the design conference Design Matters 22, called “The Art of Oversharing”. In-person tickets for the conference are sold out, but you can still find Online and our newest Networking Tickets here! Her first book, What the Fuck is This, is a collection of never-before-seen illustrations where she explores what is like to be a young woman.

Creative Director and Digital Artist Rafafans talks about inspiration and the possible cures for cre...

We talked to Tiziana Alocci about data-driven creative process s, her inspiration, and the career ch...