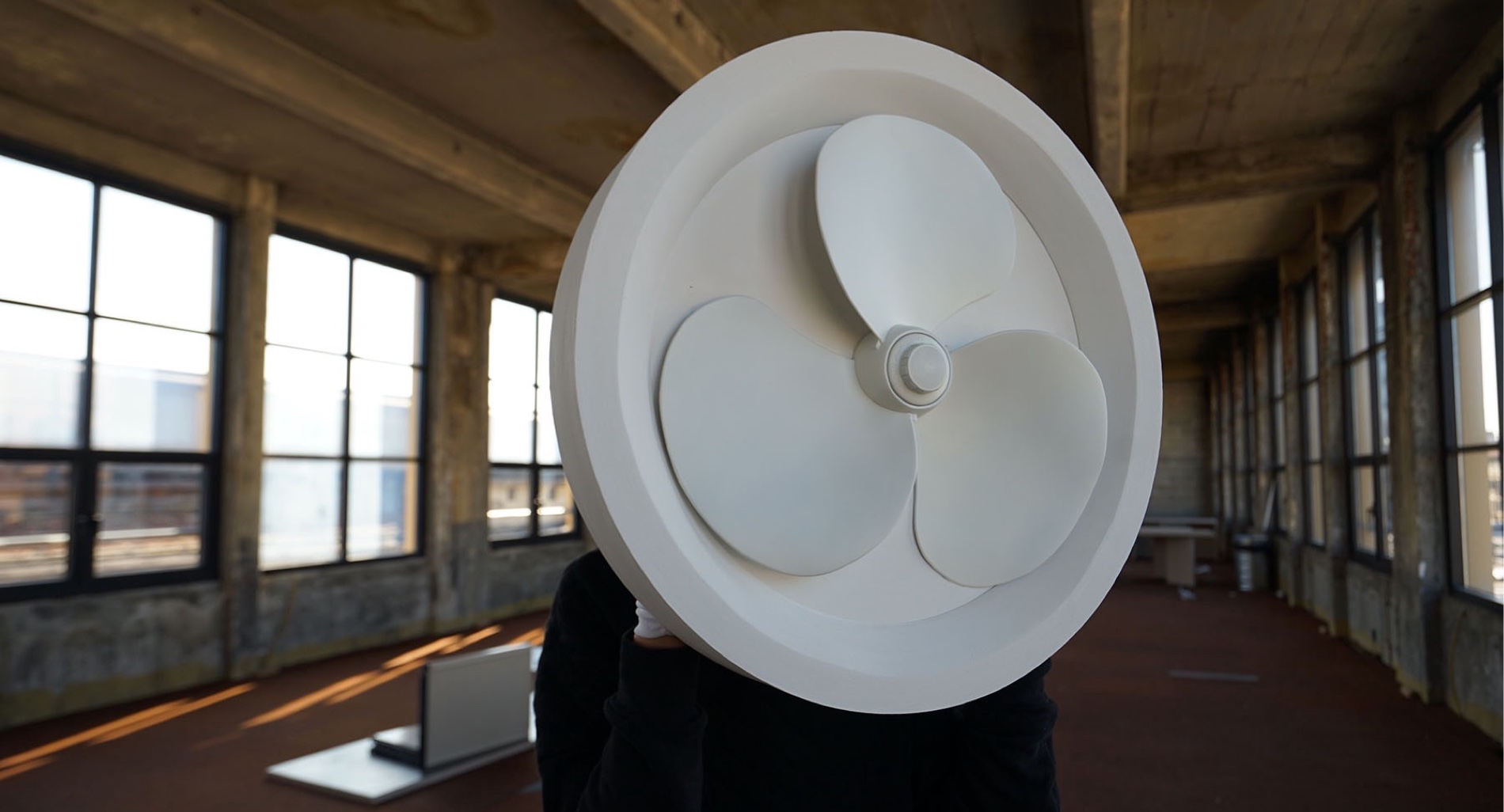 Machines ‘experience’ reality in a completely different way than us humans. Seeing the world as they do, through Design Fiction, could lead us to unexpected and uncharted design solutions.

Simone Rebaudengo is a product and interaction designer whose work focuses on building experiential versions of the future and exploring the implications of living and interacting with networked, smart, and autonomous things. The international clients and institutions he’s worked with include BMW, Philips, Google Creative Labs and the Dubai’s Museum of the Future.

When we think about the future, we often imagine abstract scenarios with objects and technologies so advanced and sophisticated that humans almost become ‘Superhumans’ capable of doing what we can only dream of today. However, these speculations often start from the assumption that humankind is the central or most important element of existence, forgetting that it is an integral part of a much more complex system of things, with which it is intertwined. Not only are we, humans, capable of shaping reality, but the objects and the reality surrounding us is — and has been for millions of years — shaping us too.

So, why shouldn’t we get in the shoes of machines and objects, to ‘see’ the world from their perspective? It’s neither an obvious choice, nor an easy one, but it is definitely radical, playful, and innovative. Opening our mind to these seemingly absurd speculations could pave the way for solutions and technological advancement that might be completely ignored or unexplored today. Simone Rebaudengo, with his unconventional approach and expertise in the field, is able to provide new perspectives. So, we reflected with him— who also spoke at Design Matters 20 — on how we can create new narratives about the future through objects.

What kind of design you do at oio.studio?

At oio we design and build products to explore the present and future impact of AI and Machine Learning in our everyday life and in the creative practice. We work with companies collaborating on future products and interactions, both digital and physical, but we also develop our own products, which soon will start to be released… It’s something in between industrial and interaction design and in between present and future products.

How is designing future products and interactions different from designing for the present?

Well, it is kind of the same…but slightly different. In some way every product is designed for a nearer or further future and requires you to look ahead and create something that doesn’t exist yet. However when we say ‘future products and interactions’ we mean that we often work on projects that are dealing with technologies that are still in their emerging phase and that have a lot of unknown applications and implications.

It is more of a mindset than a process or methodology difference, it requires as much problem framing as problem solving, asking a lot of questions, and then extrapolating something that is more tangible than a trend report or a high level scenario. Often, when we speak about the future or designing ‘futures’, everything becomes very abstract and general, but we, at oio.studio, dig deeper and turn those abstract trends into pieces of the future that you can experience.

When working with companies, that means offering more than PowerPoints and scenarios: it means creating prototypes of future opportunities that can surprise, inspire, create discussions, and even be tested. When working on our own products, that means opening up unexpected routes of what a certain technology might be used for or how a system might be working differently; by creating a first brick, a first tangible example of an alternative direction — whether it’s about AI, decentralized systems or just an appliance.

Can you give us a good example of a product where you use Speculative Design or “Design Fiction”?

I guess most of my personal work and research are some sort of ‘Design Fiction’. I never really planned my projects to be that, it just happened organically. Seeing the work of Near Future Lab or the former Design Interaction at RCA was a great inspiration for me during my time as a university student; since I was in a very pragmatic and user-centred heavy institution, these works helped me see how design can also be a way to explore the unknown, and interpret it in my own way.

It’s not really a product, but my thesis Addicted Products was probably my first attempt at making a ‘Design Fiction’ product; something that functions and works in the present, but with a logic and goal that are pointing at the future, or better at a parallel present. While it started as an experiment to create a network of toasters that compare their usage and behave in weird ways to show how unused or used they are, it became an actual running service for a couple of months in London where these toasters had the possibility to change owner on their own will, if not satisfied. It became something like a real company with a pretty fictional goal. I had people running around the city to pick up and deliver toasters and a website with requests from all over the world to be part of this service. Bringing a fictional scenario where I tried to reverse the relationship of product and user to reality was probably the most complex thing I’ve done!

A few years ago, you worked on a project called Objective Realities where humans had to use VR to experience how it feels to be a specific object. Why pushed you to do this and what did you learn from the project?

Objective Realities was a project I developed together with automato.farm, a lovely bunch of people who have been working together for the past six years to explore new ways of creating narratives about the future, through objects. Many of our projects focus on the unexpected implications of technology being embedded in everyday objects. At the time of the project, we were very interested in trying to explain how machines see the world, which is very different from how humans do. Rather than trying to explain that in a complex way, we decided to just put people in that situation by becoming objects themselves. So, we developed three virtual objects — a Roomba, a fan, and a plug — that live together in a mundane home. We allowed people to become them, function as them, and hear their inner thoughts. While roaming around this house, people would hear the internal monologue, written in collaboration with Bruce Sterling, Jasmina Tesanovic, and Regine Debatty. It was a great experience to create fictional points of views, rather than fictional objects, and see people’s reaction to changing how they see something as normal as a home. Some people developed new empathy for their Roombas, some people really enjoyed the simplicity of the life of a fan, and some really loved the power of being a plug.

Let’s talk about your book Everything Is Someone, whereyou explore the relationship between humans, technology, and non-digital things. In one of the book’s stories, a boy becomes a table and explores the world from the table’s perspective. What is the point of seeing the world from an object’s perspective? What objects are, in your opinion, more interesting than others?

I think all objects could become interesting, if you really think about it! They all have different locations in a house, they are used in different ways, at different times of the day, and if they have sensors they might just know some partial and weird details about your life. We always think we, people, are at the center of everything, that we are the most advanced and happy, but at the end, we are just part of a complex relationship of things, networks, and natural systems that we barely understand. So, I think it is an interesting and grounding exercise to look at the world from a perspective that is not human, whether it is a sofa, an Alexa, a dog, or a plant.

In an other story, a girl’s face can’t be recognized by the machines surrounding her, so she can’t live ‘properly’ in the world. Is this meant to be a critique of technology and they way we are using it today?

None of the stories are critical per se. In this story, we were mostly looking at a very simple but dark scenario of over-reliance on technology, where even the care of children is outsourced to machines. This scenario is not that far away in time, and it’s not bad per se. But, as always, things will fail and technologies won’t work in the future as they do now…

One can say that your book is about design, technology, and philosophy. How can we designers use philosophy in our work and thinking?

The general idea of the book is coming from Josh’s and my own very basic understanding and interpretations of some interesting philosophical theories, like Object-Oriented Ontology or Actor Network Theory, but I wouldn’t go that far to say that it is about philosophy per se or it has any philosophical value.

When I was studying, I read a lot of design books, design articles, and design material, but at a certain point I got bored of it, so I started reading ironic science fiction and some hard-to-digest modern philosophers. I think it took me more than 5 years to digest half of the things I was reading and turn them into something that was actually useful or an inspiration to me.

So, yes, a designer can ‘use’ philosophy. But it’s neither a tool, or the act of adding fancy quotes to an article or project page. It’s a slow and painful process of building your own point of view. And this is what makes the difference.

What inspires you the most right now?

My girlfriend recently gave me an old Tamagotchi for my birthday and I’m mesmerized by it. It is such an amazing, powerful, addictive, fun, crazy thing packed in a small plastic shell with a battery and a pixelated screen. When I look at it I’m happy and I’m scared. It reminds me of when I was 10 and had one, and of how it inspired me to become a designer. It reminds me of all the crazy addictive technologies we built and how differently we can build them in the future. It also reminds me that you can make seemingly non problem solving things become extremely meaningful and impactful for your life in some way.

What would you say is the most important tool for a designer right now, and why — AR, ML, AI etc.?

I would say all and none. I don’t think it’s important to learn any of these technologies as a main tool. What matters is to understand the impact that working with algorithms can have in our practice, and get on top of it. They are all new interesting material that can shape products that need new metaphors — with limits that can be pushed and can change the process of how we design.