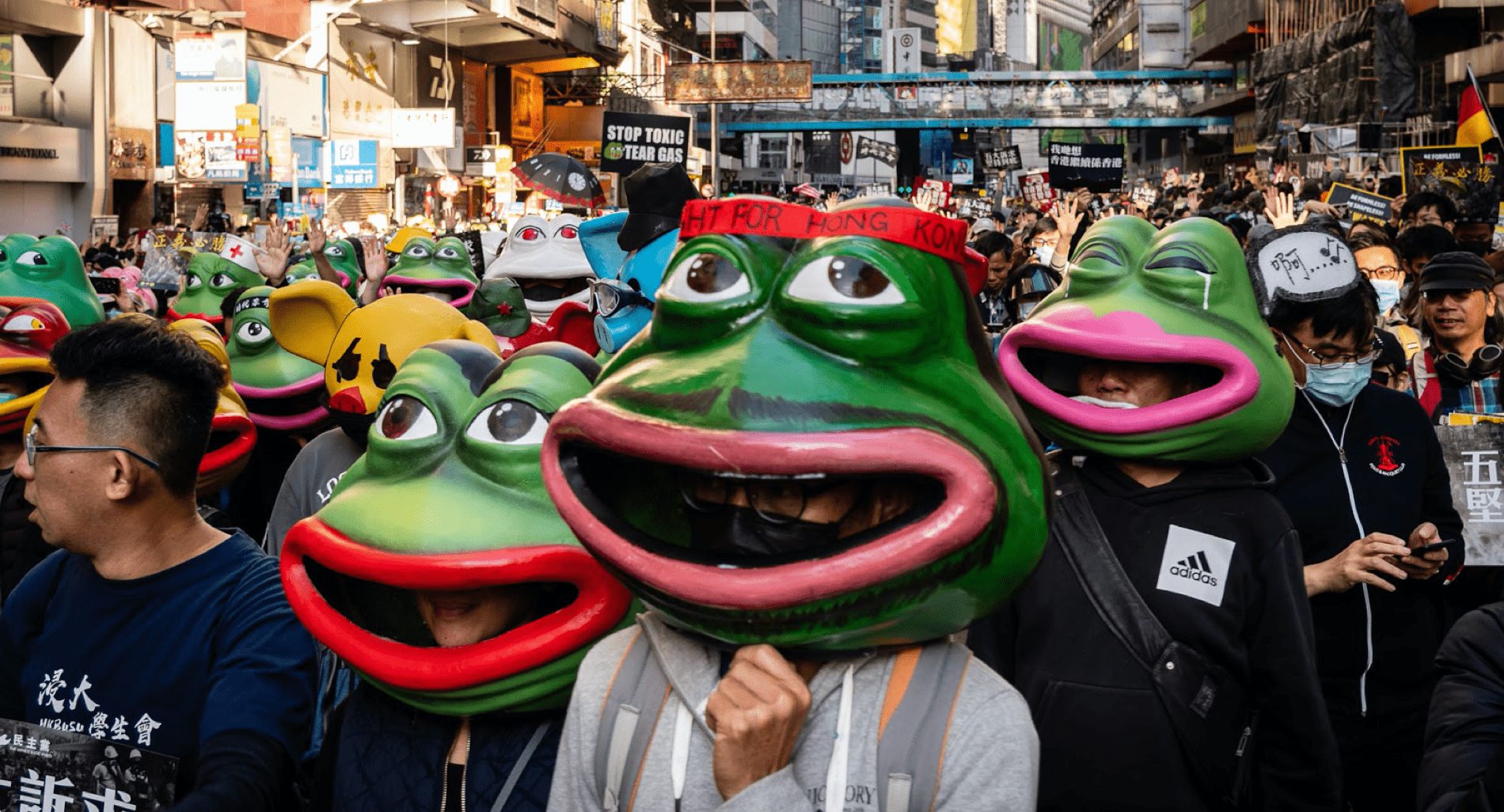 Memes: A Powerful Visual Communication Tool Based on Anonymous Collaboration

Relatable, immediate, and easy to spread, memes make a phenomenal communication tool. But unlike many other tools, memes are the fruit of anonymous and unmoderated collaboration, making it one of the most fascinating creative collaborative design projects…to handle wisely!

The definition of meme

The term meme derives from Ancient Greek μίμημα (mīmēma), meaning ‘imitated thing’. The term is used in Anthropology to define an idea, behavior, or style that becomes a trend and spreads by imitation, often carrying symbolic meaning. Memes are, therefore, a means for carrying ideas or concepts, which can be transmitted through writing, speech, gestures, or other easily imitable phenomena.

So, memes have existed for a very long time. However, Internet memes — usually just called memes — are a more recent concept. A meme is a quickly consumed comedic and relatable piece of media; it can be an image, video, audio, piece of text, etc., typically humorous in nature, that is copied and spread rapidly by internet users, often with slight variations.

Why talk about memes?

Millions of memes exist, and thousands of new ones are published every day across different platforms and Social Media. Because memes need to be understood and consumed immediately, their design is relatively simple. This makes them easily replicable and editable, with the consequence being that they circulate incredibly fast on the Internet. A simple yet powerful visual tool like this, which is able to communicate a message so rapidly should be object of interest and analysis for designers and communicators who seek to reach their audience in alternative ways.

Another fascinating aspect of memes is that they can’t exist without a community creating, spreading, consuming and supporting them. Memes are so appealing because everyone can find a meme ‘niche’ to relate to. The ‘meme market’ is indeed huge and varied.

Memes reflect the sense of humour of the community that produces them and, consequently, they can assume very different formats. This is why, for example, specific styles or templates are usually liked by a specific generation. Gen Z’ers tend to appreciate memes with surreal, nonsensical, and non-sequitur themes, and Millennials seem to love nihilist memes. But, in reality, anything and everything can be turned into a meme: possums, frogs, historical facts, cartoon characters, historical facts, stock images, and random photos posted on the Internet with no specific intention to become viral. The ‘memefication’ of things has become so systematic that an image or piece of media that has become viral is even given a name or a title. That’s why people have created websites like Know Your Meme — a comprehensive and continuously updated encyclopaedia of memes.

But why do we need meme encyclopaedias? The mainstream audience usually ‘meets’ a new meme when it becomes viral and it’s already all over the Internet. Some people just want to find the origin of the meme, the place where it was first published — information that sometimes might be hard to retrieve. Other people want to find the name of a meme to look for more variations of the same meme, or to get the template and make their own memes, feeding this huge virtual universe based on anonymous collaboration that is in constant evolution and expansion.

Where do memes come from?

The majority of memes are usually first circulated on Reddit and 4chan. For those who have never heard of — or never dared to — visit 4chan, it is an imageboard website, hosting boards dedicated to a large variety of topics, from music and films, to anime, manga, sports, politics, etc. Posts are ephemeral, meaning that old threads are deleted if no new content is added, and users typically post anonymously. Despite 4chan looks like an ugly 90’s website, it receives more than 20 million unique monthly visitors, with more than 900k posts made every day.

4chan has become known — at times infamous —  to the mainstream for the controversial content that is published on the boards named /b/ and /pol/ (learn more about 4chan by listening to the Ted Talk by the creator of 4chan). /b/ (or Random) is a board with a ‘no rules’ policy — except for a ban on certain illegal content — that hosts to a community of users characterised by dark comedy, which is often incomprehensible to outsiders. /pol/ (or Politically Incorrect) is a board for political discussion. In the early 2010’s /pol/ gradually turned rightward, racist and sexist, and in 2015 during the US Presidential campaign, many users expressed their support for Trump through memes, in particular through the Pepe the frog meme.

What’s the deal with Pepe?

When Trump tweeted an image of Pepe the frog looking like himself standing at a podium with the President of the United States Seal, the Internet exploded. That tweet was just the tip of the iceberg. Trump tweeting /pol/-associated memes meant that the future president of the United States was acknowledging the existence of a community that had never been out in the open until that moment. Pepe, which had already conquered the mainstream media in the versions Feels Good Man, Sad Frog, Angry Pepe, and Smug Frog, was now dominating the Internet as a symbol of racism, sexism, and far right wing ideology.

This is when Matt Furie, the illustrator who created Pepe back in 2005, decided to step forward trying to bring Pepe back to his original nature, which was neither sad, nor racist or sexist; Pepe was a chill, happy frog character in the comic series Boy’s Club. Needless to say that most of his attempts to control the image of Pepe and the ideologies associated with the anthropomorphic frog failed. He tried to create a positive movement in an attempt to bring the ‘real Pepe’ back by inviting people all around the world to post positive, wholesome images of Pepe and outnumber the negative ones.

But it didn’t work. Feeling overwhelmed by the fact that the sweet, adorable frog he’d created had been irreparably distorted by the Internet, he resorted to an extreme decision; Furie declared the death of Pepe by releasing a comic strip illustrating the frog dead in a casket, surrounded by his friends.

Despite Furie’s hopes to end the Pepe phenomenon, Pepe the frog continued to circulate and evolve. However, today, Pepe has assumed a new identity, becoming a symbol of freedom and fight against oppression in the Hong Kong protests (watch the documentary Feels Good Man for Pepe’s full story). Pepe is truly emblematic of how a community has the power to distort (and rehabilitate) the message associated with a meme. And this is what makes a meme a thorny tool to work with.

Like a sort of open-source project, memes are an anonymous, unmoderated, and global collaborative tool

When we think of collaborative tools, we picture software and tools like Figma, Invision, Trello, Podio, etc. that allow a restricted number of users to work on the same file or platform. An open-source project allows anybody to use, study, modify, and distribute that project for any purpose. Similarly, memes are easily accessible, modifiable, and distributable. Like an open-source project, memes are free; but unlike an open-source project, a meme is ‘stolen’ content that dodges copyright issues. Another peculiarity of memes is that they are an unmoderated and anonymous tool for message conveying.

Anonymity, lack of moderation, and the great speed at which they circulate make memes really hard to control. Matt Furie’s case is just an example. But Furie is not the only one who has come to this conclusion. András Arató, better known as ‘Hide the pain Harold’, became a meme when an Internet user made some of András’ stock photos become viral by adding humourous text to them. The 75 year-old man didn’t want his pictures to be manipulated and associated with sad or depressed messages, but soon he came to realise that if he’d managed to have one website taken down, the next day three more would pop up with the exact same type of content (watch his Ted Talk here).

Another person who, like András, decided to embrace the meme is Brittany Broski, known as ‘Kombucha Girl’. In 2019 Brittany uploaded a video on TikTok, with the description ‘Me trying Kombucha for the first time’, showing her reaction flip-flopping between disgust and appreciation to the taste of the fermented drink. The video went viral when someone reuploaded it in ‘Gay Twitter’ captioning it “When I eat *ss for the first time”. That wasn’t exactly what she intended to do by posting that video. Her face also started to appear in Hong Kong protest posters and in Climate Change posters in New Zealand. She had no control over it, and she even lost her job because of this meme. But, eventually, she embraced itand built a career as a comedian thanks to it.

Brittany’s case also shows that what is considered a meme changes over time. Originally, memes were an image template to add text to, but the concept has now become broader including videos and audios. Thanks to platforms like TikTok, memes have also become audios (extracted from an original video) to which users add their own video.

However, the fact that the format and message memes carry can change almost overnight makes them a difficult, but not impossible, tool to work with. In addition, the ‘meme market’ is vast and divided into different niches; so, for a company, using memes as part of their branding and marketing strategy can be a minefield. The risk is that part of the target audience ‘won’t get it’ or that the audience will think that the memes made by that company aren’t that funny. This has happened before, resulting in real flops. That’s why many companies are wary about using memes. But the game is worth the candle, as memes are one of the most powerful communication tools on the Internet. With great power comes great responsibility.

Some brands nailed it

Just because memes are complicated, it doesn’t mean they’re impossible to use successfully. Lucidchart, an online diagram software, excelled at using memes to show how their product works.

Another example is high couture brand Gucci, that included with success something so widespread and popularized like memes into their communication strategy, showing that memes are really for everyone.

One more example is the Italian funeral home Taffo. Death-themed jokes and social media marketing through memes have helped this family business create more brand awareness in an industry that … is never going to die. A few days ago, Taffo responded to the Lidl shoe craze happened last week in Italy, which has seen a limited edition of trainer shoes produced by Lidl Italy flying off the shelves and being resold online at crazy prices. Taffo posted a meme where a coffin painted with the colours of the supermarket company’s logo is captioned with the quote “We don’t make shoes, but we’re good at making coats. Wooden coats”.