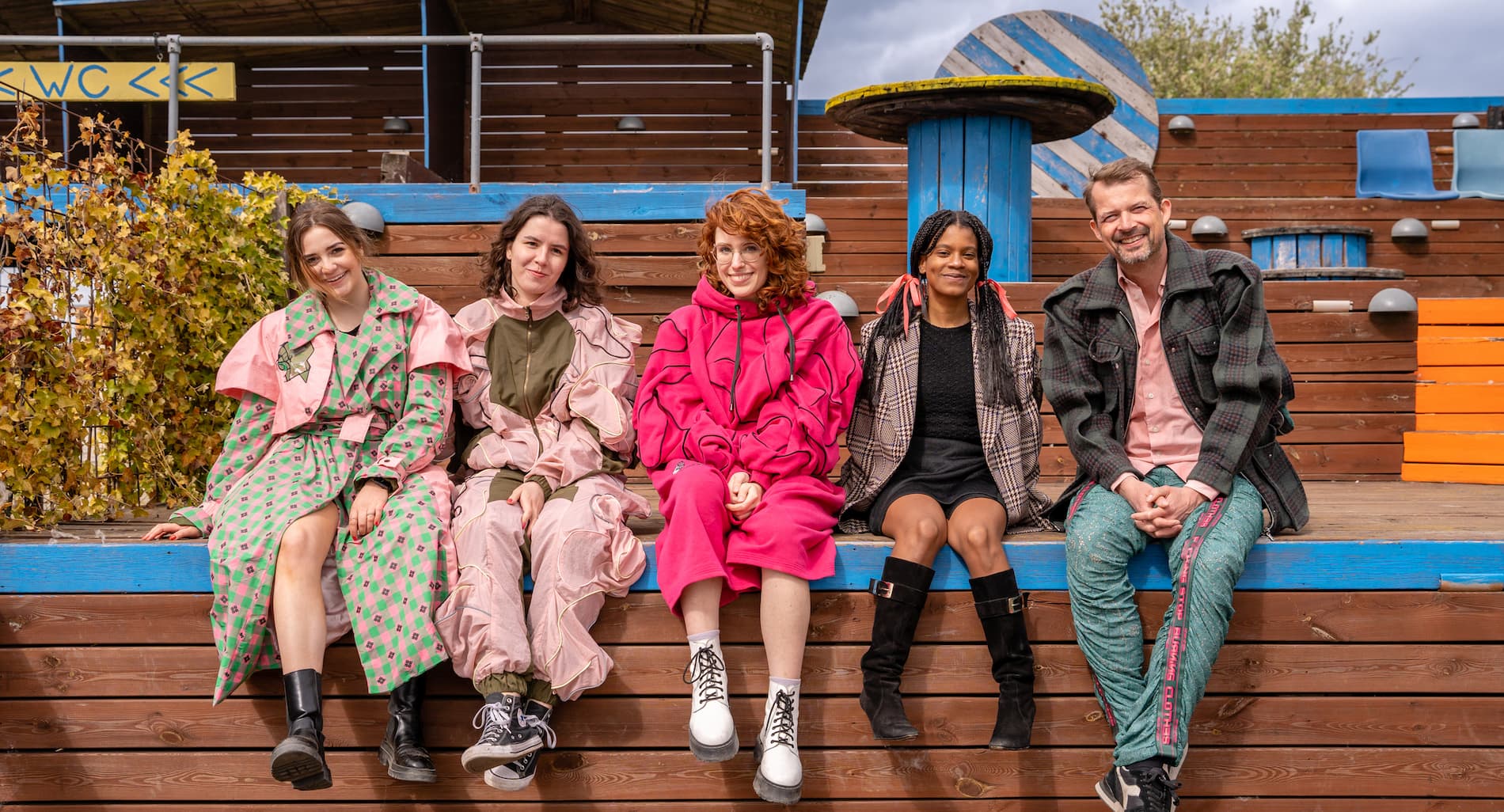 Discovering the Relationship Between Fashion, Sustainability, and Activism.

Fashion designer and activist, volunteer firefighter and The Royal Danish Academy alumni: Milan Flíček, lives by the message “Fucking Stop Burning Clothes”. The collection includes a militant look with a cargo-style jacket and backpack in the same fabric. Flíček’s certain styling works perfectly together, connecting pieces patterns and hues of fabric that are not easy to put together, but guided by his way of finding beauty in the mundane and love for juxtaposing color and patterns.

In 1969 Jan Palach burned himself in Prague in protest against the invasion of Czechoslovakia by the Warsaw Pact armies, according to Elizabeth Napier at Georgia State University of 100 billion garments made every year worldwide, 92 million tons become waste. Inspired by the political protest of Palach and his self-immolation. The Collection “Fucking Stop Burning Clothes”, aims to relate this historical act, thus interpreting the act of Palach whether “I have to self-immolate in order to stop fucking burning clothes”. Fashion as an industry is really complicated, there are many layers to still unpeel and new discoveries being made of past mistakes, but with designers like Milan we are one step closer to creating more responsible designs.

Can you tell us about when you first started designing and what led you to decide that was your calling?

I have to tell the story about my mom. Because when she figured out that she was pregnant in the old times, you know, we had to go to the doctor to figure out if you were, there were no tests. We lived in a small town. On the way back from the doctor, when she figured out that she was expecting, she went to the shop, and she bought a sewing machine. So she always says that she chose what I was going to do with my life. However, I found it when I was like 15. I always wanted to be a firefighter. But then I figured out I don’t have the guts to do it. When I went to High School, which was focused on fashion design, I fell in love with it, and decided.

That’s a really cool story, in a way it’s like your mom manifested it

What do you want people to know about your love child Our Shift?

I think that there are so many things which we have to change. And that’s Our Shift, we are raising awareness about the issue in the fashion industry. And, as we mentioned, the first one was about the burning of clothes. But that’s just the tip of the iceberg, you know. There is a lot of overproduction, and we mistreat the people who make our clothes. The things that we actually wear, they are made of plastic, so they are really bad for our skin, the fabric cannot breathe and eventually can cause cancer. So we actually just want to raise awareness about this issue, and change it because we believe that fashion is the most beautiful thing that we can do. And I think we try to heal it. Because we really still want to produce stuff. But like in the most thoughtful way. That would be the message of our shift, I believe.

Your collection“Fucking Stop Burning Clothes” seems like it has to do with the mass consumption and waste of fast fashion, a topic being explored by a lot of the fashion industry, what is your take on the topic of sustainability and the fashion industry?

During my master’s studies, I figured out that we burn approximately 90+ million tons of clothes yearly. Which is insane. Can you imagine that like a T-shirt? Like, doesn’t even weigh a kilo? You know? So it’s like how many T-shirts do you need to have to make one ton? But we know that these numbers are the things which we officially send elsewhere, and we lose track of it. So that makes me really upset. A lot of companies actually have been focusing on that.For example, Burberry, there was a big scandal with them, because they actually have been the first one who actually has been accused of burning clothes. So the question is , if you don’t burn it, what the hell are you doing?

We have to acknowledge that this is the issue. I want to throw some light on it, because The European Union is really trying now to push new laws about this issue. France, completely banned the burning of clothes. So it’s a good step, but a little bit funny, because, you know, you can burn and whatever else elsewhere. The European Union Commission’s are trying to push the limits on overproduction as you have in the wine industry. In the wine industry you can’t produce a certain level but the fashion industry doesn’t have any limits. So you can produce as many clothes as you want to.

Yeah, like how the west always dumps their clothes in bangladesh.

Yeah. Bangladesh, it’s an amazing example now actually the very new discovery, is Ghana. There is a very lovely documentary called Dead White Man’s Clothes. Europe, America, New Zealand, and Australia send ships to Ghana. There is a big market which is the biggest in the world with secondhand clothes. The issue is that they are sending such bad clothes there, that they can’t even sell it, and they don’t have enough facilities to dump it or put it in a landfill. There was a landfill that was built, which could last for 15 years, but it lasted only four or five, because when it started taking clothes, it just went overload. Now there are new illegal burning places for clothes. If they don’t burn it, during the rainy season, it will go to sea, which is also another problem, because they have long rainy seasons, and the clothes end up going to the sea because the clothes aren’t secure. Which has created tentacles of clothes wrapped around each other which creates another new issue.

What are you finding out about the Copenhagen fashion scene compared to the Czech Republic? How do you think sustainability is being addressed through fashion in CPH versus Czech Republic?

What inspires you to design?

1. I want to get inspired by something. Like raising awareness.

3. I get really inspired by people and history. But at the same time, I just sometimes see a bird. And I’m like, wow, cool color, could be anything, there’s a beauty to that.

Did you go to fashion school? What did you learn from it?

I took my highschool focus on fashion design and tailoring. Třeboň, and then they actually helped me to get to Art University Bournemouth, which is next to Brighton in the south of England. When I took my Bachelor’s, Brexit happened, and I was looking for a more sustainable approach in studies and then I figured out that KADK (The Royal Danish Academy) could be a good place. So that’s why I ended up in Denmark. I also love Lego, I was playing so much with the little Vikings when I was little.

What is your relationship with color?

To be honest, we have a textile colleague here, and I thought my relationship to color was so strong, but when I met them, I realized I’m such a noob in comparison to them. I believe that color is really important. I honestly hate black garments. Because I think it’s easy. Because when you wear a pair of black jeans, you can combine them with anything.If you have yellow pants, you have to figure out what else you’re gonna wear with it. It’s nice to have some, black jackets and go to the theater with them or whatever, but I don’t necessarily like to use black in my collections, because I believe that colors are more important. I love diversity. I will say that pink and mustard yellow and dusty or rose pink are my favorite colors.

Why does Our Shift choose to upcycle garments and fabrics versus using new fabrics and creating your own garments?

I believe that upcycling is challenging, and I quite like challenges. I feel so sad when I see a good garment, with a little hole and people throw it away, and it’s a perfectly good garment, or a perfectly good fabric. We have deadstock fabrics, which also are thrown or burned? Because they’re out of the season. Upcycling is so exciting, because it brings a new way on how to think about garments, and gives them a new life. It’s something that really keeps my mind sharp. I created my own technique, the fire piping technique. When I’m using scraps, you can’t usually do any patchwork because you have to cut the perfect sizes which are different. So with this new technique, you can use whatever is left over, and then connect them together with the piping and then you have a new style of new garment.

What are you focusing on for your next collection?

I actually am focusing on the problem in Ghana. That’s something I really want to go deep into. Because there’s another step in the iceberg, after the burning of clothes it’s like another layer of how the issue is shown in the world, that goes beyond burning clothes.