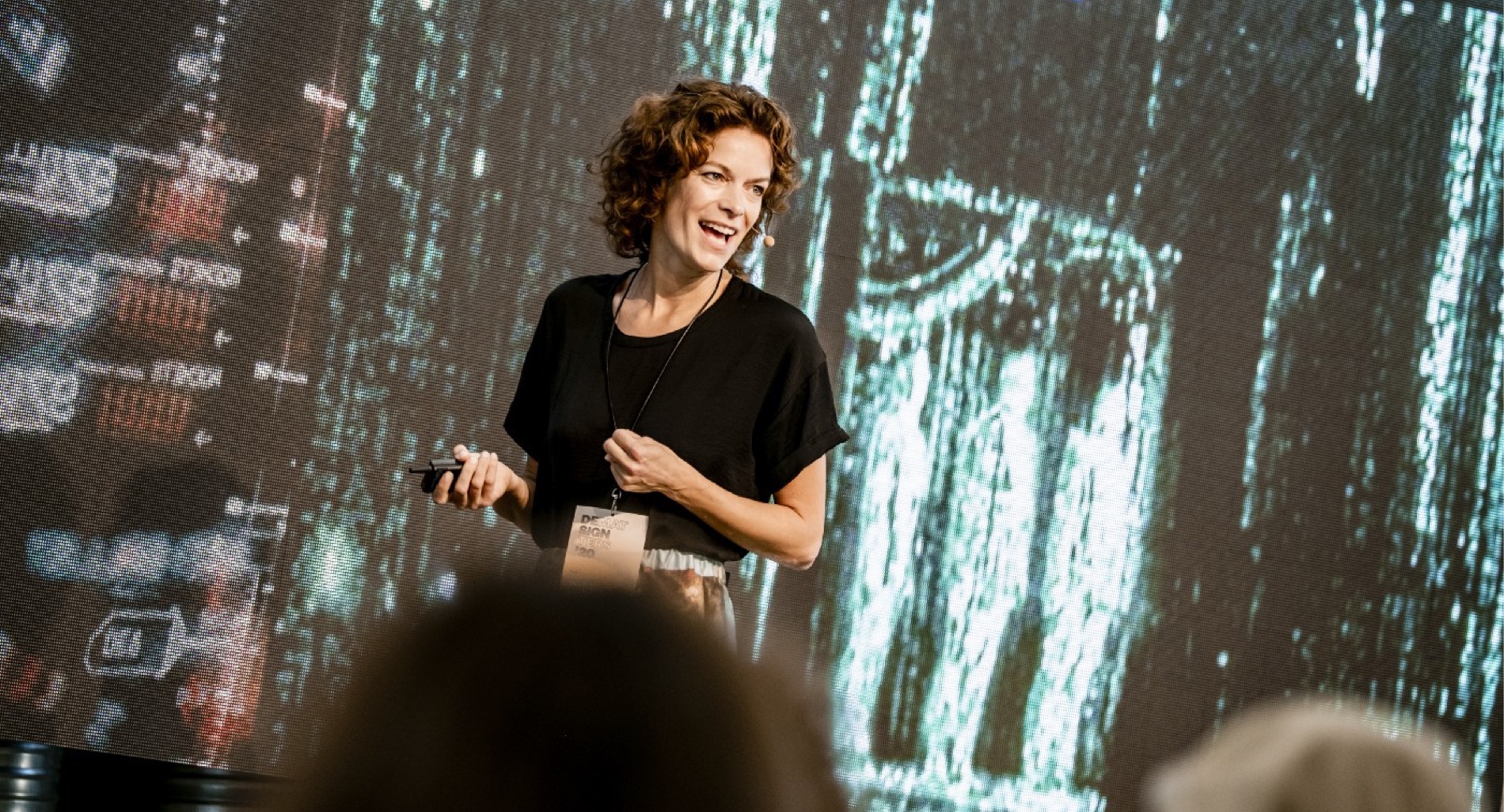 “Real Fake”, one of the three themes of the annual conference on digital design, explored the dichotomy between the tangible and intangible in a world increasingly affected by Extended Reality technol

A Bit Out of the Ordinary

Obviously, Design Matters was a little bit different this year. Yes, with it being 2020 the conference was held both in-person and streamed live online. And yes, the in-person attendees sat a couple meters apart, wore masks, and obsessively sanitized their hands. However, the annual conference was the same in one particular way that had absolutely nothing to do with the coronavirus: we embraced and explored new technologies.

As co-founder, Ingrid Haug, explained in the introduction to the two-day adventure; for the past two years we at Design Matters have focused on the risks and dangers of technology instead of singing their praises and diving into their opportunity. This February, after a trip to Tokyo, Japan; we sat down and decided as a team and with a committee of designers, to do this year’s conference a bit differently. This meeting led to the establishment of the three themes: Scrappy Creative, Next Gen Design, and Real Fake.

Real Fake, was explored by many of our speakers — from fashion to social media we heard designers discuss the ways that they believe digital technology should, or should not, provide users with false experiences. By hearing from designers on both sides of the aisle, we were able to explore the possibilities and risks associated with our abilities to blur the lines of what is reality, and what is a figment.

Anita Patwardhan Butler, Design Director at Twitter, focused on how the social media giant is aiming to mitigate the spread of false or misleading information through the deployment of prompts and labels. It is hardly any surprise that many articles shared online come with clickbait-laden headlines or misleading titles, such as the 2017 Telegraph article John McCain Responsible for London Terror Attack or the Express article from the same year proclaiming Merkel calls for German-Led EU army. Unfortunately, many such articles are often shared without exploring the article’s full text, leading to a social media circulation of misinformation. At Twitter, Patwardhan Butler and her team have aimed to reduce the circulation of these articles. Thus, the team has designed a prompting system — in which Twitter users are reminded to read the article they want to share, before sharing it with their followers. After numerous iterations, exploring the efficacy of different colours, visual designs, and sizes; the new prompting system has now yielded a measurable reduction in the total number of shares, while in turn increasing article click-throughs prior to sharing.

This direct attack on misleading information also encourages people to make more informed decisions about amplification, by prompting them to pause, take a moment, and read before sharing. Additionally, the implementation of these prompts also arguably increases the user’s critical thinking. As the user is asked to meaningfully rethink and validate their decision to post without reading the article, they inherently question their motives and are forced to confront this behavior. It is worth asking if the success of these prompts is due to their newness — providing the user with something they have not seen before is visually jarring and requires a reaction. However, with time will these prompts lose their efficacy as users become used to the pop up? And click-through in the same way that we ‘Accept all’ cookies on webpages, or the ‘terms and conditions’ in an app download? Hopefully, the novelty of such prompts will not wear off, and other sites will also take it upon themselves to combat the spread of such harmful misinformation.

While Anita Patwardhan Butler explored the need to mitigate the potential effects of spreading the fake, many of our speakers discussed how their use of technology could provide their users with real, fake experiences. While Tattoodo showed the possibilities of using Augmented Reality to provide users with a preview of what their tattoo might look like on their skin, members of the fashion industry also provided a couple examples of how ‘fakes’ can be used in a brand new way.

Damara Ingles, an independent curator of Extended Reality fashion experiences showed us her work for Gucci; explaining how she has utilised Extended Reality to create a new kind of fashion experience. Ingles’ use of ER, or technologies that have enabled her to create realities both with and outside our tactile world, has allowed her to recreate the virtual bond between millennial and gen-z consumers and their goods that she experienced as a child with her tamagotchi. This technology creates fashion goods that can grow and expand throughout time, like the Gucci seed Ingles planted to yield a garden, creating an eco-centric ‘wearable’ experience.

What will this mean in the future? For the first time, fashion is not something that is immutable through time, but something that changes and adapts to us and our environment. Is mutable fashion a metaphor for the sudden and rapid changes the newest generations have had to cope with?

Meanwhile, Amber Jae Slooten, fashion designer, creative director, and co-founder of The Fabricant, a fully-digital fashion house that creates absolutely no physical clothing, explained how she believes that we will purchase and wear virtual clothing in the future. As the first to graduate with a solely digital collection in 2016, Slooten painted a picture of the upcoming generation of buyers. Driven by a hyper-consumerist desire to never be seen on social media in the same outfit twice, they are also contradictorily interested in supporting more sustainable fashion and less wasteful industry practices.

However, Slooten’s The Fabricant is able to turn this contradiction on its head to supply consumers with a never-ending supply of new clothing, that has no physical waste at all, only data. With no constraints, only the limits of her imagination, The Fabricant provides a fashion narrative suitable to 21st century needs and desires; able to produce runway shows around the world simultaneously, with merely the effort it takes to send and share a file. She has worked with Artificial Intelligence to design new products — feeding strategic information into the algorithms to find new styles that might otherwise be unexplored by a human designer.

As Slooten has been exploring how to make this ‘thought couture’ more accessible to those who want to wear it, Morten Grubak of VIRTUE, The Creative Agency by VICE has been working on a new project that could significantly reduce waste in the industry. By employing Facebook/Instagram filters, Carlings’ ‘The Last Statement T-Shirt’ has endless possibilities for digital designs; able to change by the day or by the second, to new graphics and even mobile designs.

Ingles, Slooten, and Grubak showed the boundless opportunities to provide consumers with ecologically-friendly experiences. Leaning into the success already illustrated by Fortnite’s $2.4 billion in revenue for solely non-tangible products, this new frontier of fully-digital fashion can provide the consumer with a constant reinvention of self and external identity, with data as the only waste product.

The Power in the Perverse

While the public is directly focused on the fight against the spread of false information, and the fashion industry has learned how to use the fake to their advantage, KHORA Virtual Reality has recently decided to weaponise the fake, to combat the intangible. By leveraging the power of Virtual Reality, Nicole Fronc Dumanski explained how the folks at KHORA have been able to provide immersive exposure therapy to patients suffering from schizophrenia. This therapy allows patients to create a face to match the voice(s), and with the coaching of a trained therapist they are able to confront the auditory hallucination in a safe, protected, and controlled environment. KHORA Virtual Reality is uniquely employing technology that mimics reality to directly contest another non-reality; paving the way for a new approach to mental health services — showing how true reality and virtual reality can blend and interact to influence us, making the line between real and fake blurrier and blurrier.

While it is obvious that we as designers need use our powers to fight against the spread of non-realities and misinformation in news and media; it is equally intriguing that we can contribute to the a positive change to an industry like fashion, that is traditionally wasteful and consumer-driven, by designing amazing product with mixed reality. And, while the rising prevalence of Extended Reality technology provides new frontiers to trick users, it can also be used for medical-good purposes, with the help from designers.

In a world in which we hold baby showers via Zoom link, have wine dates on FaceTime, and meet our future partners on Hinge; who is to say that digital experiences are not real? Perhaps by continuing a fight against misinformation that negatively affects users experiences of real life, such as the circulation of ‘fake news’ and conspiracy theories; while simultaneously embracing technology that blurs the boundaries of tangible vs. digital reality at the benefit of ecological sustainability, we can create wider definitions of what is ‘real’ in our future worlds.