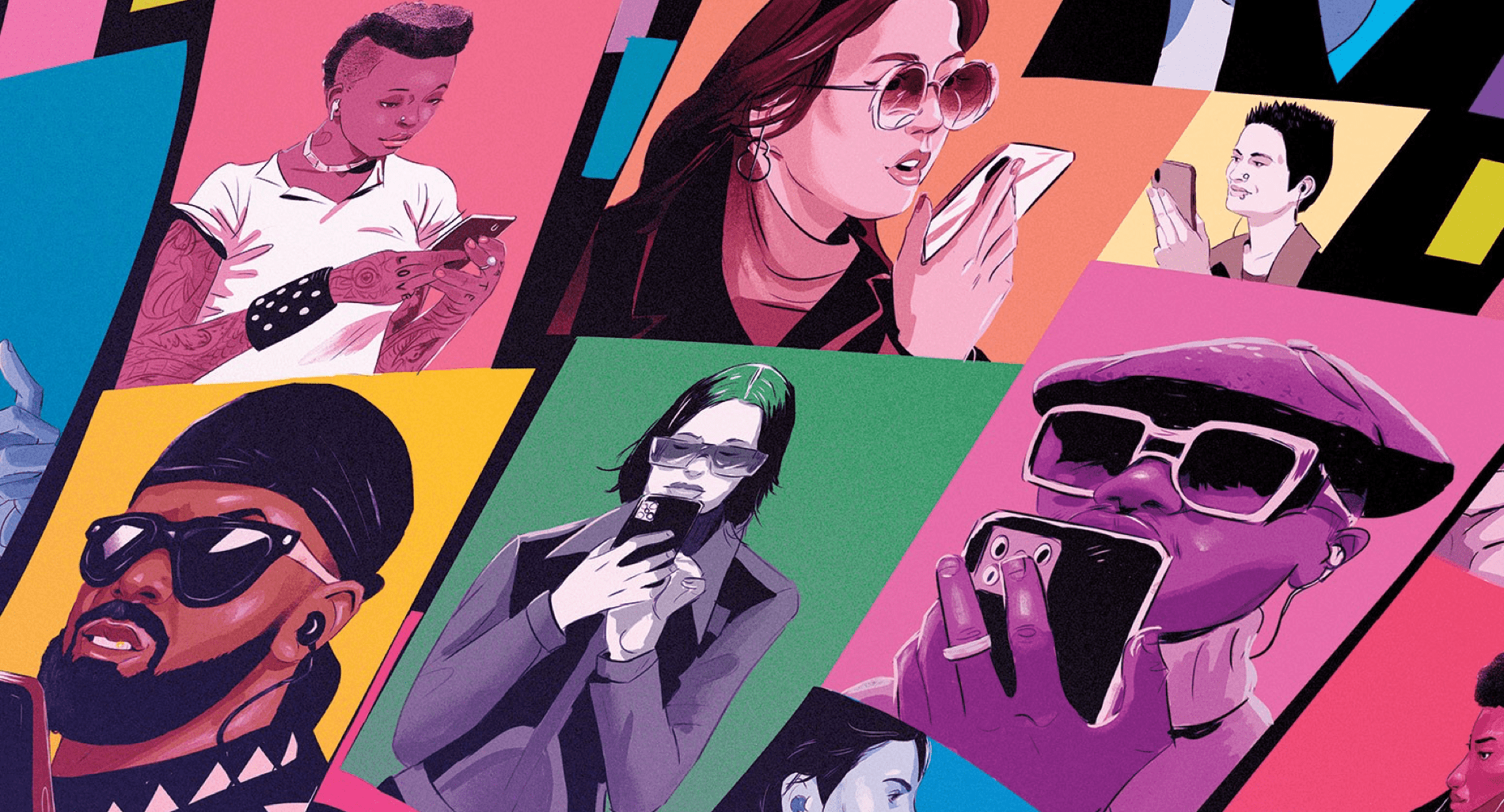 All you need to know on Clubhouse. Will it be the social media of the future?

This new audio-based app has been making headlines lately. What makes it so special? How is it revolutionising social media? And what are the controversies with it?

Released for the first time in early 2020, Clubhouse was created by Paul Davison and Rohan Seth. By May, it was valued at around $100 million despite having just 1.500 users at the time. Now the app has reached 6 million users and it’s worth $1 billion.

Clubhouse is a drop-in audio chat. The company describes itself as a new type of social product based on voice that allows people everywhere to talk, tell stories, develop ideas, deepen friendships, and meet interesting new people around the world.

How does it work?

Clubhouse is invite-only, meaning that, in order to join, an existing Clubhouse user has to send an invite from their app giving you access to set up an account. Currently, the app is only available for iOS, but it seems that the developers working on a version for Android.

On the platform, any user can start a “room” which other users can join. Each room has speakers, listeners, and moderators who control who gets to speak. The way in which conversations are handled on Clubhouse is very similar to the one of conferences; the mediator is in control, and people get to speak only when they’re given permission. In fact, listeners are muted and can ask to speak by raising their virtual hand. This allows a less chaotic way of participating in the same conversation.

Moderators have a very important role; not only they help set the tone of the conversation, but they also hold a strong influence over the conversation and energy in the room. Because the app currently doesn’t have any feature for reporting abuse or hate speech and the conversations are not recorded or saved, it’s up to the moderators to make sure that the conversation in the room is respectful and peaceful. Moderators can indeed turn on/off the ability for audience members to raise their hands, promote other speakers to moderators, mute speakers and even send them back to the audience.

Joining Clubhouse feels like walking down a corridor full of rooms with closed doors; you can give each room a quick glance — seeing the name of the room, some of the people currently in the room, and the number of people and speakers in the room. The rooms you see are public and anyone can hop into any of them at any time. But you can also start a private room with one or more of your connections and have a private chat.

What makes it stand out from other social media apps?

Instead of focusing on text and images like every major social media platform, Clubhouse focuses solely on the audio experience. This is the first time that a social media app doesn’t base its content on aesthetics or appearance; there are no faces, no pictures, no videos, no private messaging, and no written comments. The app relies on the only thing that’s left: voice.

Another interesting aspect of the app is its UI, which is incredibly simple, if not even basic. The reason behind this could be a lack of initial funds to build the app. But with the app gaining more users by the day, things might change, and perhaps the developers will add a more branded UI. The app doesn’t have a consistent icon either — the icon is in fact replaced with each major app update, featuring images of Clubhouse users.

However, one feature that makes Clubhouse stand out from other audio-based platforms is the fact that you can minimize the app to check into other apps without losing your place in the chatroom; you can check your email, follow a speaker on another platform, or reply to messages on different channels without missing a word of the conversation. Basically, you can jump in and out of different chat rooms, in something similar to a live, interactive, free-flowing podcast. Mimicking real-life interactions, Clubhouse is an intriguing mix of live podcast-style conversations, panel discussions, and networking opportunities.

In an era where social media have become the “fast food” of online content, Clubhouse takes a completely different approach; if on Tiktok or Instagram videos generally last a few seconds, on Clubhouse chats go on for hours in the rooms. Clubhouse isn’t the only platform focusing on audio that has gained a lot of popularity; Twitch, for example, doubled its streams already in April 2020, with 1,6 billion streamed hours per month. Twitch’s “Just Chatting” feature has helped bring people closer together, and many big names have live-chatted on the platform, such as Alexandria Ocasio-Cortez. The success of these “slow” platforms, where users spend a lot of time — the average time spent on Twitch is 95 mins per user — , contrasts with the typical narrative that assigns GenZ a very low attention span. The need for a more personal and as-close-to-reality way to communicate during this pandemic also showed in the rise of videotelephony software like Zoom, which grew by 396% in 2020. Big tech companies are already chasing these new trends; it seems that Facebook and Twitter are already investing to create products similar to Clubhouse. Messenger has upped the size of its Rooms to 50 people, Whatsapp removed the 4 people limit for videocalls, and Instagram has made Lives visible from desktop and is developing a co-watching feature that allows sharing videos of other users during Lives [source Willmedia].

Is it safe? What’s the controversy with Clubhouse?

The app currently has no content moderation policy and no safety features, like the possibility to block a user or the ability to report harassment. Some users have in fact complained about abuse problems and lack of moderation on the platform, stating that the app has become a place for misogyny and racism.

In addition, Clubhouse’s terms of use and privacy policy are only available in English, and its data protection is based solely on the CCPA and not the GDPR. This doesn’t mean the app is not available in Europe, though. Because of these issues, the German federate Consumer Organisation has issued a written warning to Clubhouse.

In regards to privacy and data security, the Stanford Internet Observatory (SIO) has confirmed that Agora, a Shanghai-based provider of real-time engagement software, supplies back-end infrastructure to the Clubhouse app. The researchers wrote in a blog post that a user’s unique Clubhouse ID number and chatroom ID are transmitted in plaintext, and Agora would likely have access to users’ raw audio, potentially providing access to the Chinese government. The SIO also noted in a tweet that for mainland Chinese users, this is troubling. Clubhouse recently stated publicly that with the help of the SIO, they have identified a few areas where they can further strengthen their data protection. The company said, “we’re rolling out changes to add additional encryption and blocks to prevent Clubhouse clients from transmitting pings to Chinese servers. We also plan to engage an external data security firm to review and validate these changes.”

Why has it become so popular?

In the beginning, the app was known primarily as a place for tech industry elites. But after Elon Musk hosted an audio-chat with Robinhood CEO Vlad Tenev, Clubhouse invitations have skyrocketed. Elon Musk isn’t the only VIP who has used the app; after him a number of famous people have joined the app, including Oprah Winfrey, Kevin Hart, Drake, Chris Rock, Ashton Kutcher, and many more. In some ways, this is part of Clubhouse’s charm; you get the chance to hear, and perhaps even participate in, conversations with famous people.

However, VIPs and entrepreneurs joining the app isn’t the only reason why this new social platform is having so much success. Clubhouse has become one of the few ways to meet and interact with new people during the pandemic. People are now seeking and valuing community more than ever, and having a chance to hear and be heard by like-minded people can help people connect, relate to each other, as well as take care of their mental health.

In addition, on Clubhouse, your voice is your only instrument to provide value, which is something completely new in the realm of social media. This means that no matter how you look, you can join the conversation. Plus, you can listen to the spoken content while you’re multitasking, similarly to a podcast. Just rolled out of bed? Going for a walk or running some errands? No problem.

Is Clubhouse here to stay?

Everyone is asking the same questions; will Clubhouse last? Is it going to change the way we intend social media? Will the networking possibilities decrease as more people join the app? Will the loss of exclusivity make the app lose its appeal? Only time will tell, and some speculate that the app will adopt a paid subscription model in the future. But for now we can only recognise that Clubhouse has successfully bridged a gap between

Lastly, looking at social media marketing, Clubhouse represents a changing demand for audiences; people want to see more value and transparency, and at the same time they don’t want the sense of fabrication and the endless wave of content that come with following a brand on social media. Will marketers and brands start to flood the app in the future? We’ll just have to wait and see!