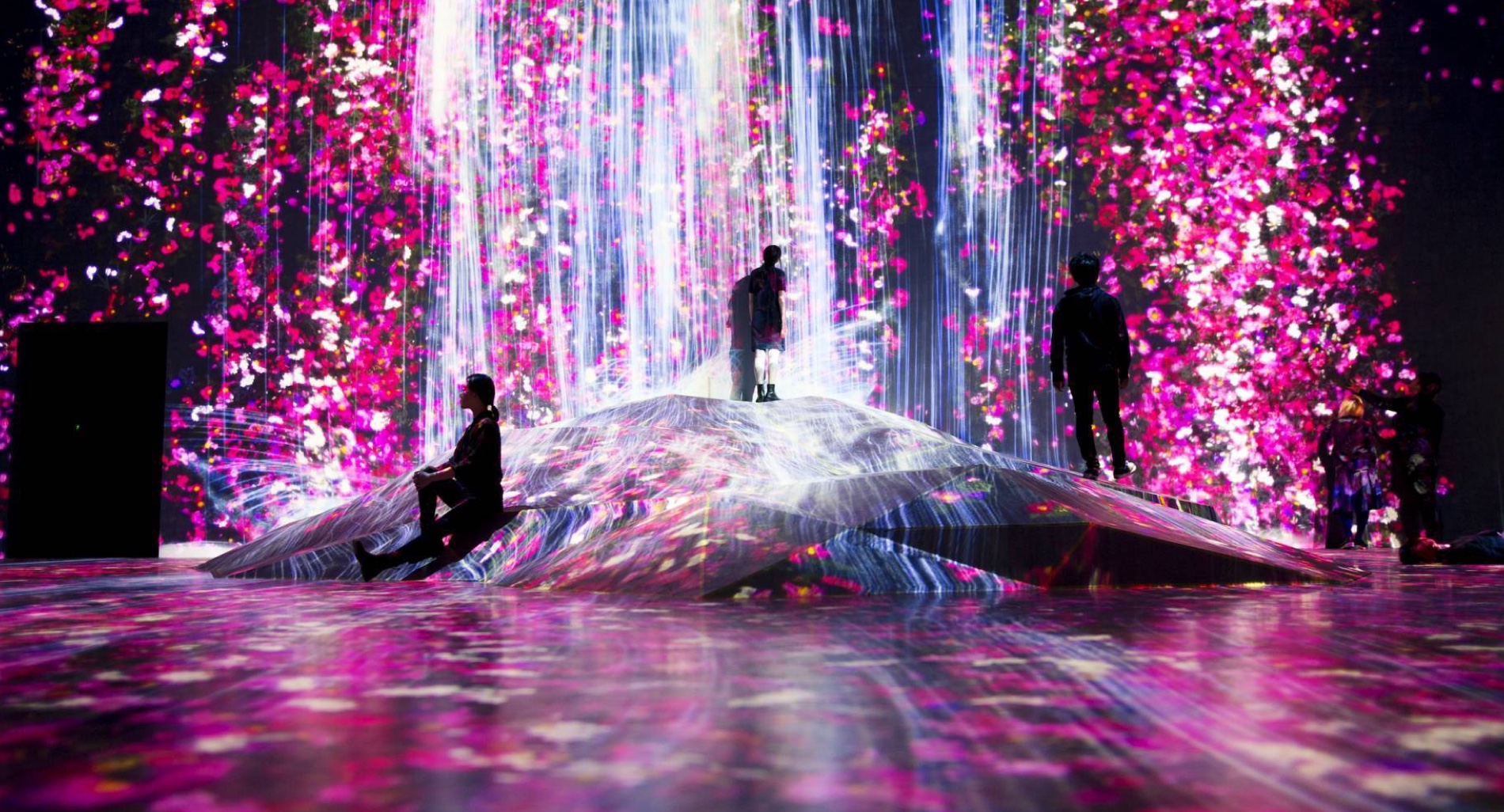 A World Without Boundaries: Interview With teamLab

teamLab’s dreamlike digital art is a treat for any designer’s eyes. The team unveils how they make art, technology and science merge together in their mesmerizing digital masterpieces.

teamLab was founded by Toshiyuki Inoko and some of his friends. The aim was to create a laboratory to explore what the world means for humans through new experiments in art.

Made by an interdisciplinary group of specialists, artists, programmers, engineers, CG animators, mathematicians and architects, teamLab’s collaborative practice seeks to navigate the confluence of art, science, technology, and the natural world.

After their debut at the Kaikai Kiki Gallery in Taipei in 2011, teamLab expanded rapidly, joining major contemporary art exhibitions around the world, including New York, London, Paris, Singapore, Silicon Valley, Beijing, Melbourne, and many more.

After visiting teamLab Borderless in Tokyo, Design Matters had the opportunity to talk to members from the teamLab team and learn more about the fascinating work of this digital creative collective.

How do you manage to make people with such a varied and different set of skills work together?

teamLab’s hierarchical structure seems flat at first glance, but it is in fact multidimensional. The big concepts are always defined from the start, as well as technical feasibility. However, the project goal tends to remain unclear, so the whole team needs to create and think as they go along.

How do you test the visual concepts for the different “rooms” that merge and interact with each other?

We do not “test” concepts, teamLab is a laboratory for experimental creations. Members with different skills create together, crossing their boundaries and their transferable knowledge. A person may not be directly involved in a specific project but their niche knowledge might be. This continuous process of creating and discovering transferable knowledge at a high speed yields the power of our group.

teamLab’s artworks are created from conception to realization in-house, making it a real art collective: we have teams dedicated to the creation of materials and hardware, architectural design, and development of software. But what really makes teamLab unique isn’t technological advancement, rather the fact that it has become able to exhibit numerous art projects worldwide in-house at a high speed — to the extent that no one has been able to exhibit before.

What is really interesting (and often chaotic) is that while we combine relatively new technologies, we turn our ideas into visuals and scales that no one has ever imagined and execute everything with an in-house team.

How does digital art change the way people interact?

teamLab focuses on connecting interactiveness with art. Video games, smartphones, and the Internet are all interactive when you intentionally get involved with them. But the type of interactivity we pursue is that your presence transforms the work, whether or not you intend to do so. Types of art we have seen so far often find the presence of other viewers more of an obstruction; you feel lucky if you happen to be alone at an exhibition. What we aim to do is to help people be able to feel the presence of others as something more beautiful than ever before.

We believe that art is an act performed by modern people to expand the notion of beautiful, just like ancient human beings did with flowers, starting to consider and call them beautiful. We don’t instantly understand the reasons or meaning behind this expansion. However, through these positive expansions of beautiful, in the future, people may behave differently, in a way that we can’t understand with today’s limited knowledge.

What power does interactive digital art have compared to a more traditional form of art?

One characteristic of interactive art is that the existence and behavior of the viewer can influence the art, blurring the line between art and viewer. In other words, the artistic work is made up of both the art and the viewer.

One consequence of this is a shift in the relationship art-viewer, as well as between individual viewer and group. Factors such as whether there was anyone seeing the artwork five minutes before you did, or what the viewer next to you is doing suddenly become important. Our interactive installations bring more attention to the actions of the viewers around you than a traditional painting would.

teamLab believes that digital technology can expand art and create new relationships between people. Digital technology enables complex detail and freedom for change. Before people started accepting digital technology, information and artistic expression had to be presented in some physical form. Creative expression has existed through static media for most of human history, often using physical objects such as canvas and paint. The advent of digital technology has allowed human expression to become free from physical constraints, enabling it to exist independently and evolve freely.

Since art created with digital technology can easily expand, it provides us with a greater degree of autonomy within the space. We’re now able to manipulate and use much larger spaces, and viewers are able to experience the artwork more directly. Viewers, in interaction with their environment, can instigate perpetual change in an artwork.

Digital technology has the ability to transform itself freely; it can make boundaries between the work and viewers ambiguous, transcending them. By applying digital art to the environment, we can create a space where people can feel that they are connected with other people in the world.

We want to re-think the boundary between the world and oneself as much as possible. It may seem obvious that there are no clear boundaries in the world, naturally. If you find yourself in a forest, you’ll notice diverse species surviving in interconnected relationships. But, when you’re in a city, the world seems full of boundaries; you feel like there is some sort of border between yourself and the world. People believe that boundaries are essential to the idea of independence. But humans can only exist as a part of this massive interconnected continuity too.

The world is something that changes due to our existence. teamLab believes that there is a borderless, continuous relationship between us and the world. That’s why we wanted to create a world where various concepts and artworks existed in continuity with no boundaries, where visitors could wander, explore, and discover; perceiving the continuity of the world.

teamLab is attempting to use a scientific approach to discover the logical structure of ultrasubjective space employing digital methods. How do you apply science to digital art?

According to Toshiyuki Inoko, founder of teamLab, science raises the resolution of the world. When humans want to understand the phenomena of this world, they separate things from each other. Even though what they really want to know is the world, the more they separate, the further they get from the overall perception.

So, how can we go beyond the boundaries of perception? Toshiyuki wanted to transcend human characteristics and tendencies through art. To him, art is a quest for what the world is for humans. Art becomes a process to approach the whole. Art has indeed changed the way people perceive the world. According to the founder of teamLab, groups move by logic, but individuals decide their actions by beauty, so individuals’ behaviors aren’t determined by rationality, but by aesthetics. In other words, beauty is the fundamental root of human behavior.

Artificial intelligence and machinery could replace many of today’s jobs. In a future society, traits that only humans possess, like creativity, will become increasingly important.

Humans are naturally collaborative and creative. However, current education emphasizes only one correct answer over all others, stifling creativity and often suppressing free thinking, when we know that in the real world there is no problem that has only one correct answer. Also, in most of today’s education systems, tests are evaluated based on the ability of the individual. Before we know it, individualism is forced upon us.

Furthermore, large numbers of people are addicted to smartphones today. Their brains may be connected, but their body is isolated. As a result, opportunities for nurturing co-creative experiences are decreasing.

Humans learn about the world through interaction with others and by sharing experiences. People think with their bodies as they move through the world, and society has developed through creative activities born from collaboration. This is why co-creative experience is very important for our society.

Today an increasing number of people want to merge physical with digital — think about face filters, AI and machine learning being integrated more and more into our lives. How does teamLab see this?

In contrast to the Social Media technologies of Silicon Valley — which we believe serve to expand the self and the individual — teamLab’s interest is the exploration of the concept of digital and how it can enhance art, not the technology itself. Most of the Silicon Valley-originated technology is an extension of someone’s mind. Facebook, Twitter, these digital domains see the “self” as the principle. We, instead,want to enhance the physical space and make it usable by multiple people, rather than making it for personal use.