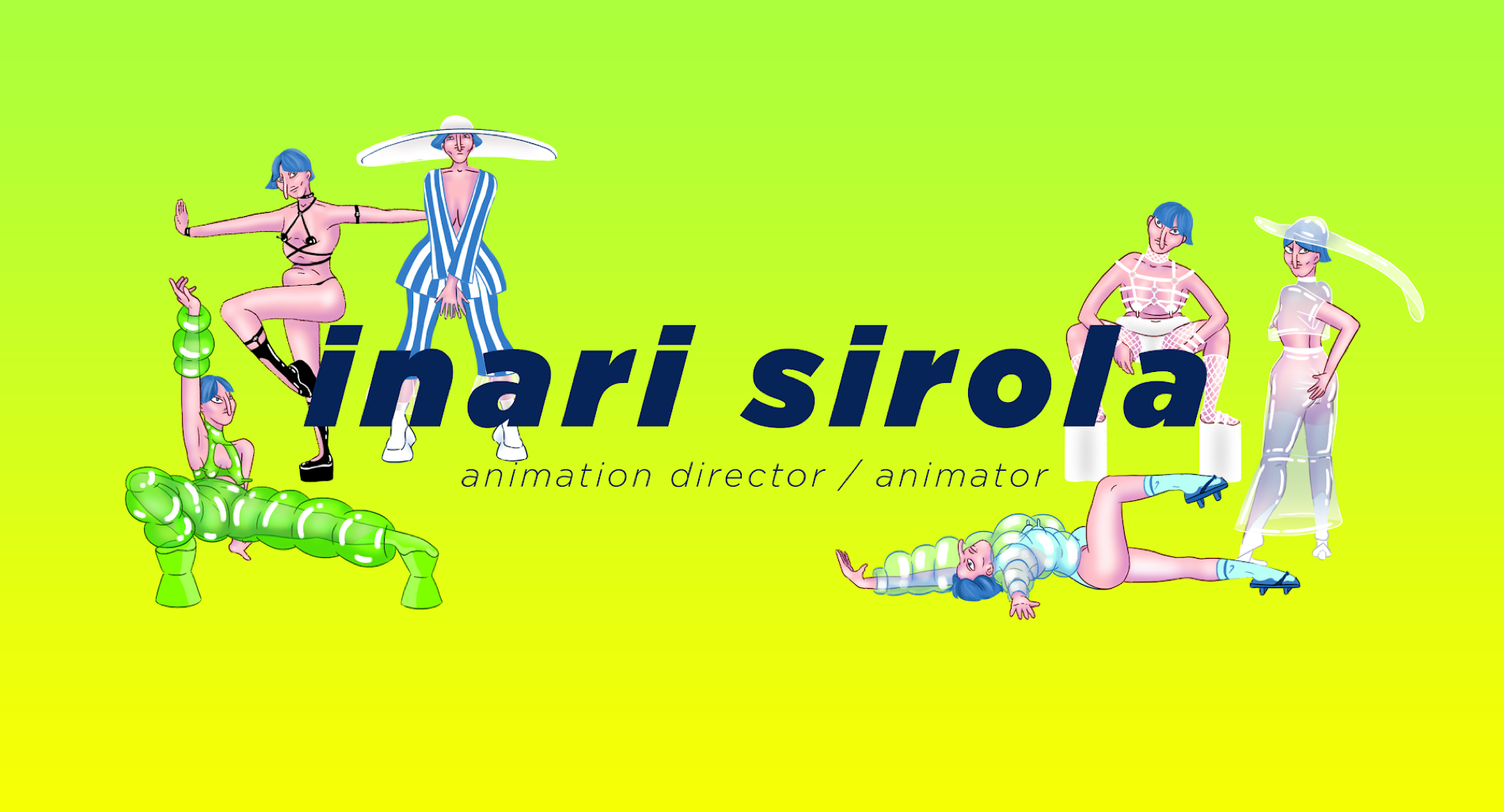 Finnish animator & filmmaker welcomed us in her unique world made of surrealism, comedy, and bizarre characters, to talk about what keeps her inspired and how she sees life.

Inari Sirola (Instagram @inarisiro) is an animator/filmmaker from Finland, based in London. Her work challenges gender stereotypes, questioning identity and confronting the limitations set by society. Tones of surrealism and comedy meet in her mind-bending realities, whilst her unique character design offers personal and social truths about body image and beauty standards. Showcasing all manner of long, saggy, wrinkly, features with love and absurdity. She often poses the question, deep down can’t we all relate to a sausage? Maybe we do in more ways than we care to admit.

Prior to her MA at Royal College of Art, Inari has had 4 years experience within the industry as well as BA in Graphic & Media Communication from the University of Arts London. Since graduating she has been featured in “It’s Nice That” Magazine as well as her films “CRAZY” and Award winning “Eating in the Dark” are currently in festival circulation, getting into high profile festivals such as Pictoplasma. Both of the films are represented by Miyu Distribution.

Inari also gave a talk at Design Matters 21, where she presented her work and motives, walking the audience through her design process and background. To watch her talk, subscribe to Design Matters On Demand.

We asked Inari one of the most quintessential, yet enthralling questions you could ever ask an artist; “where do you get your inspiration from?”

We are bombarded with consistent visual stimuli to the point where you almost forget what’s curated inspiration and what’s social media content.

For me inspiration comes from everywhere, so I decided to divide my inspiration into categories, and give you a brief flavour of each. Hopefully this will transition you into my view of life and you can join this inspiration journey!

I absolutely love all of these three directors. Whatever they put out there I tend to love and resonate with. I can’t ignore the fact that they all identify as women, as do I, so perhaps there’s a connection. But that has never been the main focus for me. Angela and Sophie both create “ugly” characters which I do as well, and then Reka who tells more heartfelt stories I completely get lost in. Angela’s ‘Urges’, Sophie’s ‘Slug Life’ and Reka’s ‘LOVE’ all live in my head rent free.

I’d say I come from an illustration background, but that being said, I’ve always drawn characters instead of sceneries. Now as my work evolves as a filmmaker, animation’s background design has become something very intriguing for me. In animation, I love how the background doesn’t really need to match the characters stylistically, and yet they all live in harmony together. Next piece of work I do, I’d love to create more of this airbrushed, hyper realistic look in the backgrounds. Everytime I see anything from Jaenam Yoo or Ram Han my mind aches; it’s just too delicious and beautiful. Looking at their work, I have no idea how they’ve achieved the outcome. Back hunched over, pixels beaming into my eyes, zoomed in 350% I try to reverse engineer and understand the construct of it all. This is absolutely part of the inspiration journey.

Fashion is 100% character design. You get to express how you look and feel, and how others see you. For the longest time I didn’t feel “qualified” to be into fashion, even though I’ve always loved it. Perhaps since I’m not someone who’s into famous brands or would know the newest collections, but the older I get, the more I’m allowing myself to own up to it. I also used to live in a household where all of my three housemates were studying fashion, so I’m not so surprised where the imposter syndrome came from, but luckily now I see it as an influence!

All three; Dom Sebastian, Sunnei and AVAVAV definitely have this fantastical feel to them. But even though they seem over the top, I’d love to own something from all of them. When I see an amazing outfit on someone, over the top or not, it truly delights me. I think that has been one of the huge perks of living in London for such a long time.

Cheesy cheesy cheesy, yet so true. I love to travel and have friends from different cultures and backgrounds. I remember being in nursery school, and my best friend who was half Filipino and half Finnish, spoke English at home. Whenever I’d be with her family I was in awe. This language that I then didn’t understand, yet they were talking in it fluently was so fascinating. I think this version of me has never disappeared, and I still get that same feeling of awe when I travel and see people living their normal lives but in another cultural context and language. And wine? I don’t think I need to explain that any further.

Nurture vs. Nurture, Armchair Expert (Expert on Expert), and My Favourite Murdrer

Once I’ve done all the heavy lifting with animating and all the creative parts, the rest becomes very monotonous. This is where I binge-listen podcasts or audio books. It’s an odd sensation, I can concentrate on the practical task at hand, but am totally and utterly engaged within the wildly stimulating podcast. While I also love music, I find myself getting a little restless.

I’m very much a deep thinker and somewhat over analyser, so listening to episodes of human behaviour or psychological intrecerties is truly fascinating. I reckon this is where I can blame my Freudian Psychoanalyst mother.

I know… you saw this coming. These three pieces of cinema or tv are always lumped together…ha-ha, let me explain.

I’m obsessed with Frasier (1993–2004). And I mean it. I’ve seen every episode a million times over in and out, and I’m still watching them. Not only is it brilliantly written, blocked and acted out, it’s comforting. Something about a story of a life that you can relate to but isn’t overwhelmingly thriving towards huge accomplishments is therapeutic. Comedy is such an amazing art form. Whether it’s a heartwarming sitcom or provocative live stand up.

Oldboy (2003, Directed by: Park Chan-wook). Korean masterpiece. I don’t watch a lot of thrillers, but when I saw this, my first reaction was feeling thankful that I had seen it. Again, the composition, lighting, camera work in its all is made with such an attention to detail, which is beyond satisfying. And again, it is so incredibly well written. Everything starts from a script, and I have such a huge appreciation for good writing.

When I first saw Midnight Gospel (2020, Written by: Pendleton Ward; Duncan Trussell; Mike L. Mayfield), my first reaction was “I can’t believe someone made the TV show I was supposed to make”. As mentioned, I’m very into deep thinking and psychology, while drawing ridiculous characters in colourful worlds, and this show is exactly that. Damn you Pendleton Ward, Duncan Trussell and Mike L. Mayfield. I’ll feel forever bitter and inspired simultaneously.

That being said, I find a lot of different films and tv inspiring, and I thought these three examples gave a nice overview. Of course Ghibli films are on the list, but so are Kubrick films. I think often people see animation as a genre. Animation is a medium, not a genre, and therefore enjoying moving-image as a whole is more than logical to me. Let’s not pigeonhole people into a medium, drawn or filmed. It all can be truly wonderful.