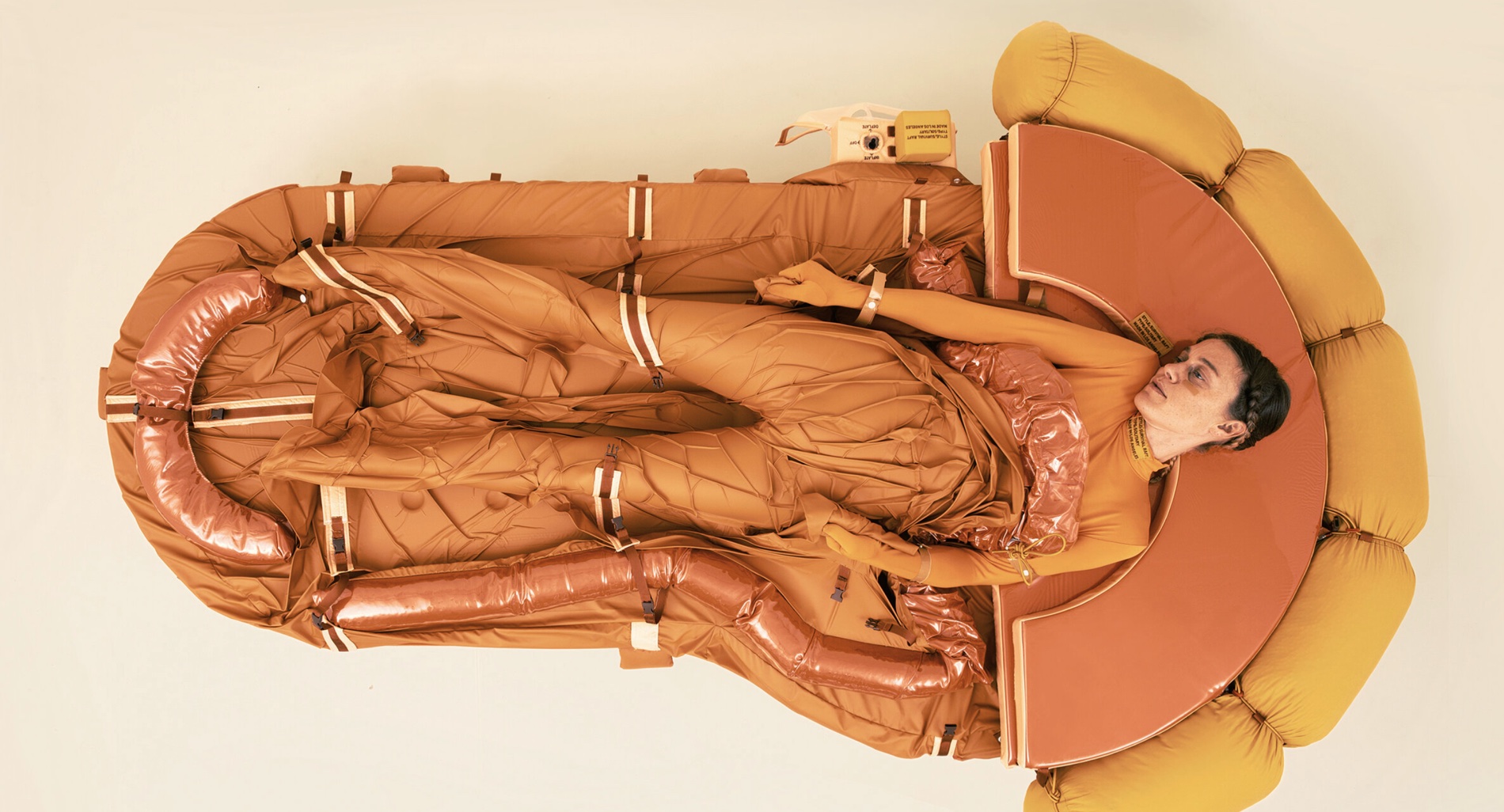 8 Spectacular Speculative Designs That Will Blow Your Mind

From cities and transport to food and wearables, design fiction spawns projects that are not only food for our dreams but also an incentive for a better future. Here, we cherry-picked some of the most vivid and beautiful examples of speculative design.

Speculative Design is one of the most exciting ways for designers to practice problem solving by design. Using Design Thinking and other methods, we can broaden our scope and develop boundary-pushing systems and prototypes that spur discussion about alternative ways of being and encourage imagination to flow freely. Design speculations have the potential to become the catalysts for redefining our relationship to reality and cultures; the results are truly inspiring, with a seductive vividness and a promise of a far future that is not far from science fiction stories.

Take a step into the future with these amazing examples of future design.

Together with a group of futurologists, scientists, and Internet users from all corners of the globe, Kaspersky — which has been developing innovative solutions to protect cities and businesses for more than 20 years — has created this beautiful website.

Earth 2050 is intended to show a picture of how people will live in 20 or 30 years’ time, including what threats will exist, what our lives will be like, what jobs we will have, what we will eat, and how the physical world will interact with the virtual. The website allows you to select a year — 2030, 2040, or 2050 — and look at the predictions for different cities and countries. You can vote, comment, and make your own predictions too.

Neo_Fruits is a Speculative Technological Design Project, by Industrial Designer Meydan Levy, that explores a future scenario where humans will create food artificially. In this project, artificial fruits are designed and printed in 4 dimensions, to offer a nutritious and vitamin-rich alternative to familiar fruits. With the introduction of industrial processes and increased capabilities of scale, food processing techniques have caused our food to move away from its original makeup, making this “new food” poorer in nutritional value. According to Levy, the gap between the nutritional need of what our bodies require and the food that enters our digestive tract needs to be bridged.

Today, 4D printing technologies enable the creation of endless objects and structures. Neo_Fruits are produced with this technology using Cellulose — an organic material. The dry structure is then reinforced with phyto-chemicals and strengthened by micro-tubes. After printing, mineral and vitamin enriched liquids are injected into the micro-tubes, making the fruits come to life, giving them volume, color, texture, and flavor.

3. Future and the Arts at MORI Art Museum, Tokyo

MORI Art Museum, in a temporary exhibition called Future and the Arts: AI, Robotics, Cities, Life — How Humanity Will Live Tomorrow, showcasing over 100 projects, aims to show what life may look like in the next 20–30 years, and ponder the possibilities of that new world. All the projects serve as a means to help us reflect on environmental issues, human lifestyles, and the likely state of human beings and human society in our imminent future.

Taking into account, the effects of climate change, technological and biotechnological advancement, and an increasing world population, all the projects exhibited at MORI give us a glimpse of what our reality might look like soon enough. For example, the Paris-based architect studio XTU has envisioned a 2050 where Earth has become inhabitable due to rising temperatures, unbreathable air, and volatile weather. So, to escape an overheated planed, they imagined that humankind will inhabit the sky.

Copenhagen-based architecture studio BIG, instead, designed a solution where people can live sustainably in cities floating on the ocean. As coastal cities struggle to cope with rapid population growth, many simply pour sand into the ocean to create new land, destroying millions of hectares of the ocean and marine life. Furhermore, the rising sea levels and climate change are compounding the problem. With Oceanix, BIG is taking a bold step towards the future.

The Compression Carpet is a machine that offers a hug to a person craving intimacy, mimicking the positive effects of a human hug. The Carpet requires two people to operate; one lying down inside the machine, and one turning a crank to slowly increases pressure.

Body architect Lucy McRae envisions a future where the growing use of technology has a big impact on people’s mental wellbeing. She imagined a future with a lack of human touch, wondering whether mechanical touch, rather than physical contact with other humans, will become the solution, serving as a stress antidote.

Because of our increasing interest and obsession with digital and the possibility that global pandemics may occur again in the future, we might become more physically isolated. That’s why McRae wants to explore the cultural and emotional impacts science and technology can have on mankind. In one of her past projects, The Institute of Isolation, she looked at how humans can prepare their bodies for life in outer space.

Will machines be designed to affectionately caress and squeeze the body, in attempt to prepare us for a future that lacks human touch? Taiwanese designer and engineer Dan Chen has already developed a machine designed to guide and comfort dying patients with a scripted message, called the End of Life Care Machine. This robot is essentially a comforting massage machine; when a patient is close to death, their arm is placed under the robot apparatus, which is positioned on the deathbed. The patient can also leave this world while hearing words like “We hope you will have a pleasant afterlife”. Perhaps in the future people will choose to die having their pain and loneliness soothed by a robot, instead of suffering alone.

Akon City is a green and futuristic city project ideated and carried by the Senegalese-American RnB singer Akon. The green city, which has recently been launched near Mbodième, a small village in western Senegal, is inspired by Wakanda, the name of the fictional African kingdom where the superhero movie Black Panther by Marvel is set.

The sustainable city will be home to parks, universities, schools, a hospital, a stadium, hotels, as well as an industrial complex. The city will also operate exclusively with the Akoin crypto-currency. The first phase of the project has already started, and will result in the construction of roads, the main buildings, a landfill and a photovoltaic solar power plant by 2024. Akon City is expected to be completed in 2029.

On the wave of Senegal’s growing economy, Akon City aims at setting a new standard for all future real estate development. The city, with its distinctive futuristic architecture and design, will be divided in seven different districts.

Alias is a teachable “parasite” designed by Bjørn Karmann to give users more control over their smart assistants, both when it comes to customisation and privacy. Through a simple app the user can train Alias to react on a custom wake-word/sound, and once trained, Alias can take control over your home assistant by activating it for you. Equipped with speakers and a microphone, Alias is able to communicate and manipulate the home assistant when placed on top of it. When not used, the speakers of Alias interrupt the assistance with a constant low noise that feeds directly into the microphone of the assistant.

Karmann believes that our relationship with technology is formed from how we interact with it, but too many commercial smart products for the home tend to treat the user as a passive consumer. Therefore, he intended to create a product that would redefine this relation, especially when it comes to privacy. Exactly how cordyceps fungus and viruses can appropriate and control insects to fulfil their own needs, Alias acts as a parasite for smart home systems.

7. The mitigation of shock — living with the climate crisis

Will we be able to adapt to the consequences of climate change? Humans will have to adjust to a world transformed by food insecurity and climate extremities. Mitigation of Shock (London, 2050) is Superflux’ attempt to make the size and complexity of a hyperobject like climate change tangible, relatable and specific.

The installation transports visitors into a London flat, around 2050 or so. Discarded newspapers and a radio show reflect the tensions of this new world, and experimental food production stacks occupy the space once given to relaxation. Changes in food production and preservation have led to the development of new recipes that seek to make the most of available food. The space looks somewhat alien, yet strangely familiar, providing an experiential insight into some of the challenges we could all soon face.

Can humans deliberately leave a geological trace of their existence? Human actions have altered the Earth so profoundly to generate and enter a new geological epoch — the Anthropocene, term that was used for the first time in the 60’s by scientists of the Soviet Union. In this epoch, the stability of the biosphere is threatened, biodiversity is diminishing, and ecosystems look more and more similar to one another, with an uncomfortably high probability of an uninhabitable planet within the next century.

This devastation will leave traces in the rock strata for geologists of the future: plastic pollution, soot from power stations, nuclear fallout, and surprisingly, the fossilized bones of the global proliferation of the domestic chicken.

Nonhuman Nonsense, a research-driven design and art studio that embraces the contradictory and the paradoxical — telling stories that open the public imaginary to futures that currently seem impossible. Founded by Leo Fidjeland and Linnea Våglund, the studio is based between Berlin and Stockholm.

Their Pink Chicken Project suggests using a “Gene Drive” to change the colour of the entire species Gallus Gallus Domesticus to pink. Being the world’s most common bird, the bones of the 60 billion chickens that are killed every year leave a distinct trace in the rock strata, which is a marker for our new geological age Anthropocene. This project would genetically modify chickens, giving them pink bones and feathers, using a gene from the insect cochineal that produces a pigment that will be fossilized when combined with the calcium of the bone. This would modify the future fossil record, coloring the geological trace of humankind pink.

CRISPR has recently invented a genome editing tool, that is used to permanently modify genes in living cells and organisms. When used in a particular way, it creates a genetic system known as a Gene Drive, which the can permanently alter a species on a global scale in just a few generations.

For Nonhuman Nonsense, pink is a symbolic color, an opposition to the current global power dynamics, where a small group of humans in power carries out actions upheld by the injustices of white supremacy, colonialism, patriarchy, heterosexism and ableism — aggravating the violence on the non-human world.

Want more examples of contemporary speculative practice and fictional? Check out SpeculativeEdu and this section of Design Boom!

This year has surely been a rollercoaster full of ups and downs, but if you’re feeling generous ab...

Despite all the time we spend in front of a screen — be it staring at insipid spreadsheets all day...